In late 2003, American singer-songwriter Eamon had a one hit wonder with Fuck It (I Don’t Want You Back). In true one hit wonder fashion, it was his debut single off his debut album, I Don’t Want You Back. The song topped the charts in: Australia, Austria, Belgium, Denmark, Germany, Ireland, Italy, both charts in the Netherlands, New Zealand, Norway, Scotland, Sweden, Switzerland and the UK.

By March 2004, Eamon’s smash single had an “answer” song: F.U.R.B. (Fuck You Right Back) by American R&B singer Frankee. No here’s where the story gets a little murky. Frankee claims to have been Eamon’s girlfriend at the time and was the inspiration for the song, while Eamon denies it and says their only connection was for licensing permission by her representatives. Either way, Frankee also achieved one hit wonder status having been inspired by a one hit wonder. Wait it gets eerier. In the UK, Fuck It (I Don’t Want You Back) was replaced by F.U.R.B.! F.U.R.B. also topped the charts in Australia, Belgium and Scotland.

An idyllic small town is rocked when Audrey Fleming (Lindsay Lohan), a bright and promising young woman, is abducted and tortured by a sadistic serial killer. When she manages to escape, the traumatized girl who regains consciousness in the hospital insists that she is not who they think she is and that the real Aubrey Fleming is still in mortal danger.

I Know Who Killed Me was a 2007 American psychological thriller film that was a huge flop and was nominated for nine Golden Raspberry Awards (Razzie), winning 8. The film was plagued by production delays, mostly due to the health of star Lohan including a hospitalization for dehydration and appendix surgery and a 30-day stint in rehab. (If you notice all the photographers in the film that’s because the paparazzi ended up in the background of many shots.) In July, Lohan was arrested for a DUI which prevented her from doing promotion for the film. Based on the box office results and the ensuing reviews, it may not have helped anyway.

Let it Bleed was English rock band Rolling Stones’ eighth British and tenth American studio album released in December 1969 and was the last to feature Brian Jones and the first to feature Mick Taylor. It was also released right after the band’s 1969 American Tour and was the follow up to Beggars Banquet. It was originally slated for release in July but was delayed numerous times. The album cover consists of the record being played by the tone-arm of an antique phonograph and a record-changer spindle supporting several items stacked on a plate: a film canister labelled Stones — Let it Bleed, a clock dial, a pizza, a tire and a cake with elaborate icing topped by figurines representing the band. The cover was among ten chosen by the Royal Mail for a set of “Classic Album Cover” postage stamps issued in January 2010. Let it Bleed topped the album charts in both the UK and Holland. It went top five in Australia, Canada, Germany, Norway and the U.S. It was certified Platinum in both Canada and the UK and 2 times Platinum in the U.S.

In Japan, you can start your day with target practice! The Gun O’Clock is an alarm clock that has three game modes. In Quick Shot you have to hit 5 perfect shots within 3 minutes to turn off the alarm. Time mode is a speed battle each morning to see how quickly you can react and shoot. Random mode changes up the timing. The alarm clocks come in three colors — red, black or white and have a range of three meters. 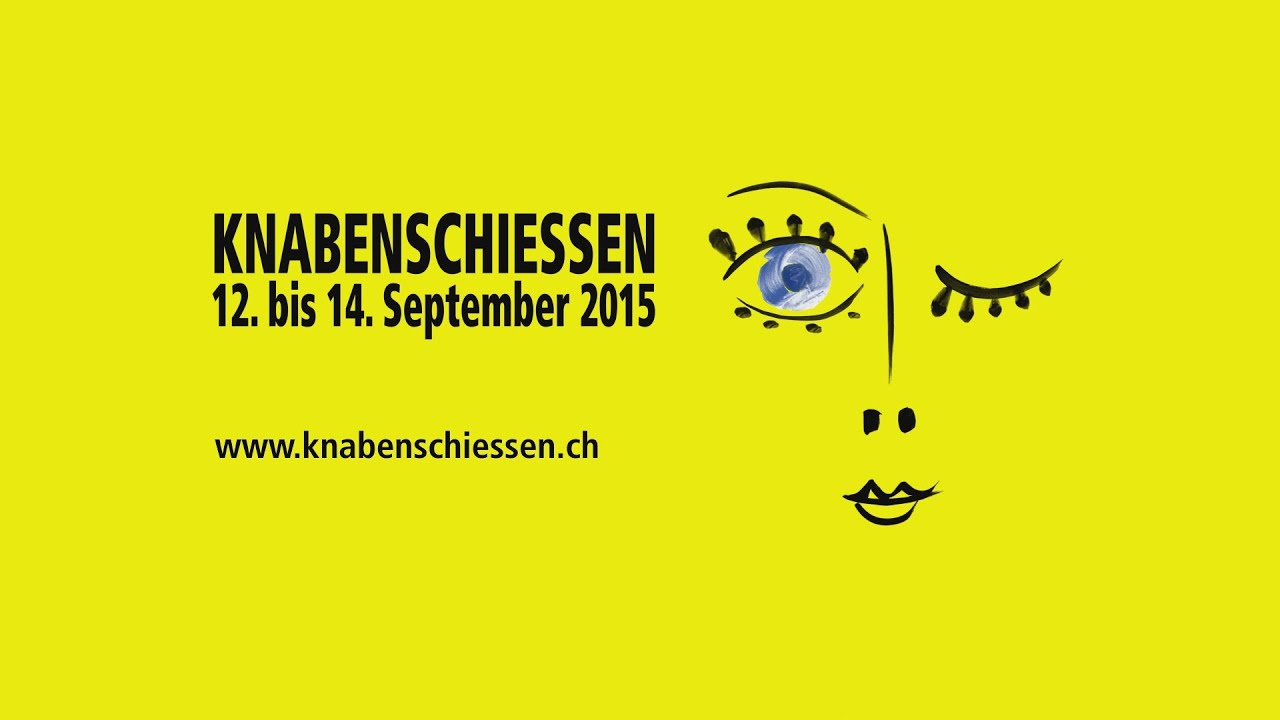 Knabenschiessen is a Swiss public holiday that began in 1889. All boys between the ages of 13 to 17 were required to practice their shooting skills. It takes place the second weekend in September. It was organized to advertise the benefits of joining the Swiss Army and since 1920, the event has been hosted by the Riflemen’s Association of Zurich. In 1991, girls were allowed to enter into the competition thanks to waning interest and changing attitudes. The first girl to win was Rachel Goldschmid in 1997. All teens who reside or are enrolled in Zurich schools are allowed to enter and use a SIG SG 550 Swiss Army rifle to shoot at targets. The contestant with the best score is named “Schutzenkonig” (marksmen king). The shooting competition is held in the center of a huge fair that has amusement rides and food booths.

Lean On Me was written by American singer-songwriter Bill Withers in April 1972. It was his debut single off his second album, Still Bill. Lean On Me was his first and only #1 single on both the pop and soul charts in the U.S. Over the years it has been covered numerous times by a variety of different artists. It is only one of nine songs to have reached the top spot in the U.S. with versions recorded by two different artists.

In 1987 R&B group Club Nouveau covered Lean On Me and went to number one for two weeks. (It also topped the dance chart.) It also won Withers a Grammy Award in 1987 for Best R&B song because he wrote it. In addition to the American chart, Club Nouveau hit #1 in Canada and New Zealand. It was their third single off their debut album, Life, Love & Pain. Club Nouveau’s last chart appearance was with their follow up single, Why You Treat Me So Bad which peaked at #39. They never hit the U.S. pop chart again, despite releasing four more albums.

Carter Vanderbilt Cooper was the late son of fashion designer/heiress Gloria Vanderbilt and her fourth husband Wyatt Cooper (and older brother of journalist Anderson Cooper). On July 22, 1988, Carter arrived at his mother’s 14th floor apartment in New York City. He had recently broken up with a long time girlfriend and was moving back home. He had not slept in several nights. After dinner he retired to his bedroom for a nap requesting a blanket as he was cold. Gloria checked on him several times during his nap and he was asleep. At 7 pm, he woke up and was disoriented, asked several times “What’s going on?” and entered his mother’s room. After a short conversation in which she tried to reassure and comfort him, he ran back up to his room. She followed to see him sitting on a low wall of the terrace with one foot on the floor, his other foot on the wall. She tried to get him off the wall and tried to call his therapist. Before she could dial the number, a helicopter flew overhead, temporarily mesmerizing him and after reaching back for Gloria, he jumped from the terrace to his death. He was 23 years old. The toxicology reports showed no drugs or alcohol in his system. Gloria blames his newly prescribed asthma inhaler containing salbutamol. (Anderson claims his brother’s “suicide” is what sparked his interest in journalism.)

In Bubble Gum, Bubble Gum a wad of bubble gum is melting in the road, one by one a variety of animals get stuck in it and have to survive encounters with a big blue truck and a grumpy black bear. 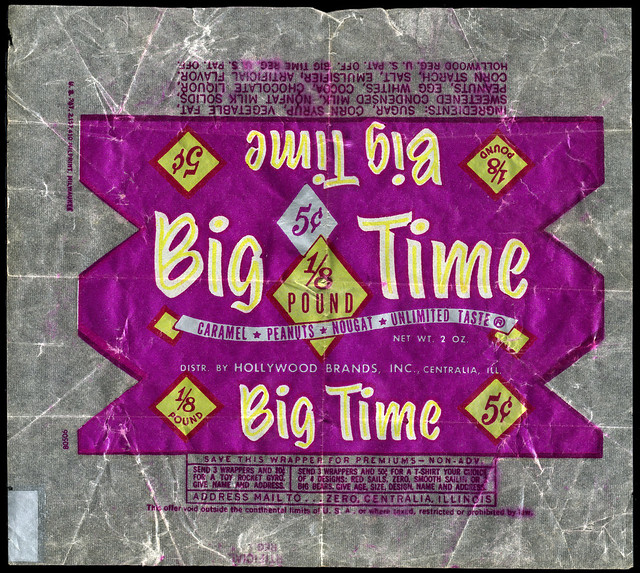 Another candy bar produced by the Hollywood Brands company was the Big Time bar. It was a bar with peanuts in a nougat center topped with caramel and chocolate.

The Hollywood Brands company was notable because they discovered a method of making fluffy nougat for candy bars that Frank Mars copied for his Milky Way bars. (Frank Mars founded the Mars, Incorporated company which makes Mars, Twix and M&M’s among others.) In the beginning as well, by using real and quality ingredients, company founder Frank Martoccio was able to sell his candy bars for 3 cents, undercutting Hershey’s 5 cent bars at the time. (This was back in the 1930s until 1955.) He sold the company in 1967 and the quality standards were not continued. Today, Hershey’s retains all the brands owned by Hollywood. The only bars that still exist today from Hollywood’s line are Zero and Milky Way.

101 Ways to Leave a Gameshow was a British game show on the BBC, airing from July 10 to August 28, 2010. Eight contestants competed for a 10,000 pound prize by picking the correct answer to general knowledge questions. Competitors that gave incorrect answers were eliminated in a variety of ways usually in a spectacular fashion. In the first four rounds of elimination, a buzzer could sound signalling an Emergency Exit round. Here, contestants were asked questions at random and the first wrong answer resulted in an elimination. For the final round, three contestants remain to answer one final question to win the jackpot.