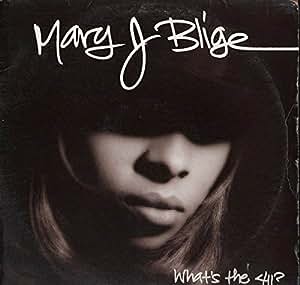 What’s the 411? is the debut album by American R&B singer Mary J. Blige. It was released on July 28, 1992, by Uptown Records and MCA Records. After signing a record contract with Uptown, Blige began working on the album with producer Sean “Puff Daddy” Combs. The resulting music covered hip hop soul, contemporary R&B, and new jack swing styles. What’s the 411? peaked at #6 on the US Billboard 200 and topped the Top R&B/Hip-Hop Albums chart. It eventually sold 3.4 million copies and was certified triple platinum by the Recording Industry Association of America (RIAA). The combination of hip hop and soul music led to Blige being named the “Queen of Hip Hop Soul.”

At the age of 17, Blige recorded a cover version of Anita Baker’s Caught Up in the Rapture in a recording booth at a local mall. Her mother’s boyfriend at the time later played the cassette recording to A&R runner for Uptown Records, Jeff Redd. Redd then sent it to the president and chief executive officer of the label, Andre Harrell. Blige met with Harrell in 1990 and became the label’s youngest and third female recording artist (after Finesse N’ Synquis). The title, What’s the 411?, derived from Blige’s past occupation as a 4-1-1 operator; it was also an indication by Blige of being the “real deal.” 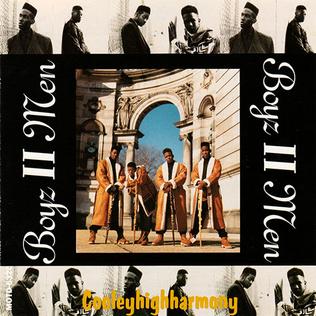 Cooleyhighharmony is the debut album by American R&B group Boyz II Men, originally released in the United States by Motown Records on April 30, 1991. The album was mainly written by Boyz II Men members Nathan Morris, Wanya Morris and Shawn Stockman and extensively produced by Dallas Austin. The album’s name is a tribute to a real high school in Chicago: Cooley Vocational High School. Boyz II Men’s second single release was an a cappella cover of It’s So Hard to Say Goodbye to Yesterday, off the soundtrack for the 1975 film Colley High. The single would also be the group’s first taste of international success, seeing it peak in Australia, Canada, the Netherlands and New Zealand. Cooleyhighharmony peaked at #3. The album includes the Billboard Hot 100 Top 5 Singles: Motownphilly (#3) and It’s So Hard to Say Goodbye to Yesterday (#2). Other singles off the 1991 release were the songs Uhh Ahh (#16) and Please Don’t Go (#49/#8 on the R&B chart). The beginning of Uhh Ahh was sampled on Beyonce’s single Countdown.

The album was re-released internationally in 1992 (1993 in the U.S.) with remixes and the inclusion of two hit singles: the worldwide smash End of the Road from the Boomerang soundtrack and In the Still of the Nite (I’ll Remember) which was initially recorded for the TV mini-series The Jacksons: An American Dream. The U.S. release also included a Spanish version of End of the Road. In 2009, a two-disc digitally remastered special edition of the album was released, containing remixes as well as two previously unreleased songs.

Cooleyhighharmony has been certified 9× Platinum by the RIAA for shipments of over 9 million units in the U.S.

Recorded by American hip hop recording artist Asher Roth, Ii>I Love College was the debut single off his debut album Asleep in the Bread Aisle. The college to which Roth refers to was West Chester University. Originally I Love College was to sample Weezer’s Say It Ain’t So but had to be re-worked by producer Ben H. Allen as Weezer’s lead singer Rivers Cuomo refused to clear the sample. I Love College does sample 10% Dis by MC Lyte. I Love College peaked at #12 in the U.S. and #26 in the UK. In 2010 American rapper Sammy Adams released I Hate College.

2000s, American Adult Top 40 chart, Camino Palmero, debut, Music, number one song of the 2000s decade, One Hit Wonder, The Calling, Wherever You Will Go

Wherever You Will Go was the debut single of the American band The Calling from their debut album Camino Palmero. It topped the American Adult Top 40 for 23 weeks, the second longest running number one of the chart’s history (behind Smooth by Rob Thomas and Santana). Wherever You Will Go was named the number one song of the 2000s decade on the Adult Pop Charts by Billboard magazine. Meanwhile, on the Pop chart (Hot 100), it peaked at #5. Worldwide, it peaked at the top of the Italian, New Zealand and Polish charts. Bitch or its censored title, Nothing in Between was later re-released as Bitch (Nothing in Between) was American singer/song writer Meredith Brooks debut single off her debut album Blurring the Edges. The song rose the charts steadily peaking at #2 in the U.S. for four weeks being kept out of the top spot by Puff Daddy, Faith Evans and 112 with I’ll Be Missing You. Brooks also reached #2 in Canada, being kept out by Hanson’s Mmmbop. It peaked at #2 in Australia as well, #3 in Iceland, #4 in New Zealand and #6 in the UK. At the APRA Music Awards of 1998, it was recognized as the Most Performed Foreign Work. Bitch has been frequently misattributed to Canadian singer/song writer Alanis Morissette due to their close musical similarities. Record producer Geza X did indeed deliberately set out to find a hit that sounded like Morissette although he was fired soon after Bitch achieved major success due to conflicts with Brooks’ record label. Runaway With Del Shannon is the 1961 debut album by American rock and roll singer/song writer Del Shannon. It contains his best known (#1 single) hit, Runaway and is regarded as helping to bridge the period between early rock and the British Invasion. While Shannon (whose real name was Charles Weedon Westover) had trouble maintaining success in the U.S. after Runaway, he continued to have success in the UK despite the fact that he was American (born in Grand Rapids, Michigan). In the late 1960s, he turned more to the production side as his chart success had slowed. His career slowed even more in the 1970s as his alcoholism began to escalate. A re-recording of Runaway for the 1986 NBC drama Crime Story led to renewed interest. Unfortunately, on February 8, 1990, Shannon died by suicide (with a firearm) at his Santa Clarita, California home as he was suffering from depression at age 55. He was inducted into the Rock and Roll Hall of Fame in 1999 and the Michigan Rock and Roll Legends Hall of Fame in 2005.

Written and recorded by New Zealand music group OMC, How Bizarre was the lead single off their debut album of the same name. How Bizarre topped the Australian, Austrian, Canadian, Irish and New Zealand charts as well as the American Mainstream Top 40 chart. It further went top five in Germany, Scotland, Sweden, Switzerland and in the UK as well as on the European Eurochart Hot 100 and the American Radio Songs and Adult Top 40 charts. How Bizarre has been certified Platinum in both Australia and New Zealand; Gold in Germany and Silver in the UK. Bizarrely, though How Bizarre was able to chart on sub music charts in the U.S. it did not qualify to chart as an official single on the Hot 100 as no commercial single was made available to buy. How Bizarre re-entered the New Zealand music charts in 2010 after lead singer Pauly Fuemana’s death from respiratory failure at age 41.

Not surprisingly for the rest of the world, all we heard of OMC was How Bizarre but they did have other singles in their New Zealand.

In Observatory Mansions a group of misfits live in a dilapidated apartment complex. What kind of misfits? Francis Orme is a living statue who steals the possessions of others to add to his private museum. Or how about a woman who behaves like a dog. Observatory Mansions was English author Edward Carey’s debut.