This vintage game from Milton Bradley is definitely a board game that would never be on the market today. The objective of this game is to put (plastic) sticks of “dynamite” into a shack before the roof blows off. The trick is you have to wear oversized plastic thumbs while doing so. The game was intended for children seven and older and includes a deck of cards to determine how many sticks you have to send down the smoke hole on your turn. The game doesn’t take batteries, but you do have to wind up the shack. When it winds down, the roof comes off the shack. The dynamite stacks come in three colors — red, green and blue. Though the game is quite loud, it is perfectly safe and quite a lot of fun.

BASH! was a Milton Bradley children’s board game for 2 to 4 players. This “real knockout of a game” came with a plastic base and pole where you alternately stacked the 6 red and yellow pieces atop each other. Remove the pole and place the head atop the stack. You used the included hammer to strike a piece to knock it from the stack and tried not to topple the entire stack. It also came with a “Phooey” card but I’m not sure why. The game is somewhat difficult to play as it requires a lot of skill to not topple the stack. The winner is the player with the most pieces collected. 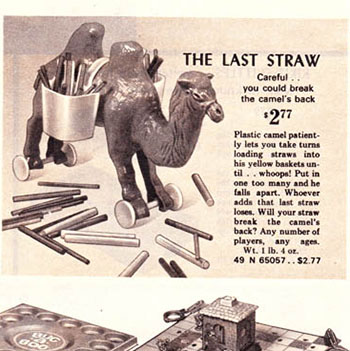 Load the camel with straw, but don’t be the one to add the straw that breaks the camel’s back! The two piece camel was on wheels and held together with a rubber band, will eventually collapse under the weight of the wooden sticks.

In 1965, Quaker Oats introduced two cereals — Quisp and Quake. They decided to have the cereals battle each other out in a public popularity contest. Both cereals had mascots created by animators Jay Ward and Bill Scott, who had previously created Cap’n Crunch. (They both also created Rocky and Friends.) Despite the different mascots, Quisp and Quake were essentially the same cereals, just in different shapes and had different slogans. Quisp was “the quisp new cereal from outer space!” and featured a pink space alien with a propeller on his head (voiced by Daws Butler in commercials). Quake was “the power cereal from inner space!” and featured Quake, a lunkhead miner with oversized biceps that wore his helmet and was voiced by William Conrad. In 1969, Quake underwent a makeover and became a cowboy. Finally in 1972, Quaker asked kids to vote for their favorite cereal. Quisp won and Quake was quickly discontinued. In 1976, Quaker resurrected the idea with their new orange-flavored cereal Quangaroos. Quake stepped in as mascot with a orange kangaroo sidekick named Simon. Of course, Quake had undergone another makeover: he was slimmer and Australian. Wasting no time, they ran their head-to-head popularity contest from the beginning. Quisp won again and Quangaroos quickly disappeared.

Today, you can still buy the saucer-shaped crunchy corn cereal that is Quisp.

Milton the Monster was a Frankenstein-looking fellow who emitted various quantities of white steam depending on his moods. He was created by mad scientist Professor Montgomery Weirdo and his assistant Count Kook who lived in a haunted house on Horror Hill. Milton turned out to be a very smiley, good natured monster because Weirdo’s elbow was bumped by Kook when pouring the “tincture of tenderness” into Milton’s mold. Milton’s voice (Bob McFadden) was based on Jim Nabors’ Gomer Pyle.

In total, 26 episodes were produced. In March 2007, Shout! Factory released the complete series on DVD.

I Fought the Law was written by Sonny Curtis of the Crickets, though it was popularized by the Bobby Fuller Four which became a top ten hit in 1966. (It achieved further success in 1979 after a cover by The Clash.) Bobby Fuller and his band achieved regional success in Texas. They won a major label contract and changed their name to Bobby Fuller Four. They covered I Fought the Law and peaked at #9 in the U.S., #11 in Canada and #33 in the UK. A mere six months later, Fuller was found asphyxiated in his mother’s car in a parking lot near his Los Angeles apartment. His death was declared a suicide, though rumors persist that he was murdered. Fuller was only 23 years old.