#1 single, Chris Cagle, country, David Kersh, debut, I Breathe In I Breathe Out, If I Never Stop Loving You, Music, One Hit Wonder, only top 40 hit, Play It Loud

I Breathe In, I Breathe Out Chris Cagle (Capitol Nashville, 2001)

In a coma, cartoonist (Fraser) finds himself trapped within his own creation and must find a way to get back while racing against the treacherous Monkeybone (voiced by John Turturro).

Two Virgins was the first of three experimental albums released by John Legend and Yoko Ono. It was the result of an all night music session at Lennon’s home studio in Kenwood while his wife was on holiday in Greece. The avant-garde content and the cover art which features both Lennon and Ono completely naked (my photo is censored, but do a search and the uncensored photo will come up), was both controversial for the public and parent company EMI which refused to distribute it. The LP was sold in a brown paper bag and distributed by Track in the UK and Tetragrammaton in the U.S. Two Virgins peaked at #124 in the U.S. Babies adore water and these adorable boats seemed like a great way for babies to enjoy being in the water without drowning. Except that they weren’t. These boats were unfortunately cheaply made and the inflatable toys actually tore very easily and dozens of babies plunged right through into the water. Unfortunately the story gets worse.

Manufacturer Aqua Leisure was well aware of the problem. Instead of fixing it permanently, every time (which was all the time) they received a complaint , they would slightly tweak the design and the name they were sold under so they could keep selling them. No recall was ever made! In fact, they withheld complete information about the defect from the federal government. They were eventually fined $650,000 for knowing about the problem for an astounding 6 years and hiding behind the justification for continuing to produce the product by saying “but no babies have actually died yet.” Despicable.

The Scrunchie was a big, fluffy hair accessory that came in any available color and pattern so you could color coordinate with your outfit. The real appeal was they provided a painless way to tie your hair back into a ponytail. The scrunchie stands as an iconic fashion image. (Can I admit I still have/use them?)

Fantasy was the debut single from Canadian rock musician Aldo Nova off his self-titled debut album. Fantasy remains Nova’s most popular song. Fantasy hit #3 on Billboard’s Mainstream Rock chart and #23 on their Hot 100. TV series Rob & Big used Fantasy in a flashback sequence for their final episode. A cover by Steel Panther is currently being used as the theme song for the MTV show, Rob Dyrdek’s Fantasy Factory.

Christopher Crosby Farley was born in Madison, Wisconsin and studied improv before joining Saturday Night Live in 1990. He had a starring or supporting role in most comedy movies in the 1990s until he was found dead of an overdose on December 18, 1997 in Chicago.

Farley was the middle child of five siblings and was always a clown, always trying to make everyone laugh. He studied theater and communications at Marquette University. After university, he joined the Chicago Ark Improv theater group and the Improv Olympic Theatre where he was mentored by Del Close, who had also taught Farley’s idol, comedian John Belushi. Farley’s film debut was a security guard in the smash hit Wayne’s World in 1992.

Though he was riding high professionally, personally Farley had too many demons to overcome. His father had been consumed by alcohol and his son picked up that same struggle and added other narcotic substances into the mix. Over a two-year span, Farley had been in and out of rehab over a dozen times (that’s every month at least?!) Farley was constantly in the spotlight for his engagement in excessive and out-of-control behavior. His manager and fellow comedian, writing partner and friend David Spade both expressed concern publically over Farley’s health. Everyone’s fears were realized December 18, 1997 when Farley was found dead in his Chicago apartment after an extreme binge of substance abuse and partying. Farley had died of an overdose of cocaine and morphine exacerbated by advanced heart disease. Farley was only 33 years old at the time of his death. (Interestingly, his idol Belushi also died at age 33 from a drug overdose.) Farley’s final two films Almost Heroes and Dirty Work were released in 1998. He received a posthumous star on the Hollywood Walk of Fame in 2005. A biography The Chris Farley Show: A Biography in Three Acts was published in 2008. The biography was partly written by Tommy Farley Jr. (Chris’ older brother).

The Professor and the Madman (Harper Perennial, 1998)

Professor James Murray was the most distinguished editor of the Oxford English Dictionary.
Dr. William Chester Minor was an American surgeon that had served in the Civil War. He was
also one of the most prolific contributors to the dictionary, submitting thousands of words.
Murray repeatedly asked Minor to visit his Oxford home and Minor refused every time. Murray
set out to find him. This would lead to the discovery that Minor was an insane murderer locked up in Broadmoor, an English asylum for criminal lunatics. 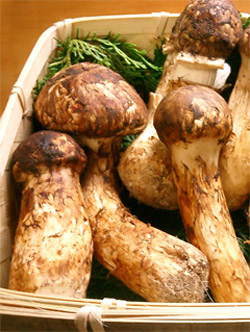 This week, let’s take a look at one very expensive mushroom: the matsutake. They sell at $1000/pound!! They are so expensive because they are extremely rare. They used to be synonymous with autumn in Japan. However, the introduction of an insect that kills the trees they grow under, has dramatically reduced the number of matsutake mushrooms produced. A new method of farming the mushrooms is still being developed, but until then the matsutake is left with a huge obstacle of survival and a huge price tag for aficinadoes.

1980s, Agatha Christie Hour, British, drama, In a Glass Darkly, Jane in Search of a Job, Magnolia Blossom, one-hour, Thames Television, The Case of the Discontented Soldier, The Case of the Middle-Aged Wife, The Fourth Man, The Girl in the Train, The Manhood of Edward Robinson, The Mystery of the Blue Jar, The Red Signal, TV