In 1983, Danish synthpop duo Laid Back (Tim Stahl and John Guldberg) released Sunshine Reggae (A-side) and White Horse (B-side). Sunshine Reggae became a major hit in Europe for the duo, while American audiences ignored it. What they were enamored with was the B-side song, White Horse (while European audiences couldn’t be bothered). White Horse spent three weeks atop Billboard’s dance chart, hit #5 on the R&B chart and #26 on the Hot 100.

Both White Horse and Sunshine Reggae can be found on their second studio album, Keep Smiling. 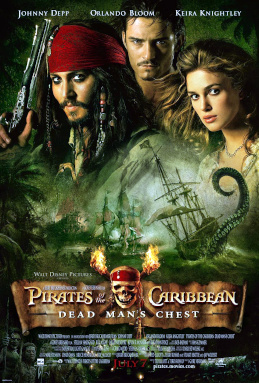 In Dead Man’s Chest, Will Turner (Orlando Bloom) and Elizabeth Swann’s (Kiera Knightley) wedding is interrupted by Lord Culter Beckett (Tom Hollander). He wants Turner to acquire Captain Jack Sparrow’s (Johnny Depp) compass in an attempt to find the Dead Man’s Chest. While Sparrow discovers that his debt to Davy Jones (Bill Nighy) is due.

Underground Album was American outlaw country musician David Allan Coe’s 21st studio album. The album was released as a mail order album, which was sold through the back pages of the motorcycle magazine, Easyriders or through the concession stands at his shows.

Underground Album was the follow-up to Nothing Sacred (1978). It contains profane, sexually explicit lyrics and resulted in Coe being labeled a racist for one particular song. In fact, journalist Neil Strauss labeled Underground Album’s material as “among the most racist, misogynist, homophobic and obscene songs recorded by a popular songwriter.”

Nothing Sacred was Coe’s 11th album and also contained profane, sexually explicit songs. It was also sold through mail order in motorcycle magazines.

Despite their slogan, “Never kite higher than you are willing to fall,” 2 people died and dozens were severely injured (think broken necks and punctured lungs).

The Kite Tube was a floatation device three meters (or ten feet) wide. The tube was pulled behind a boat and by yanking a cord, the rider was able to glide through the air. The problem was once you were airborne, you had no control over the tube (slogan fail!) Though it sure sounded cool. The only safety “restraints” were stirrups and hand grips.

Wego ceased production claiming there was no way to determine the actual cause of the accidents, but that “out of an abundance of caution,” they were recalling the tubes.

In a club called The Peppermint Lounge in New York City, a fad was born. In 1960, singer Chubby Checker and his song, The Twist made the dance a worldwide phenomenon.

To Twist: Pretend you’ve stepped out of the bath and you’re toweling off your back, or that you’re putting out a cigarette with your toe.

The Twist started to get replaced when other dances, especially the mashed potato and the Watusi came on the scene in 1962.

There’s Something On Your Mind (Part 2) was Bobby Marchan’s most successful release. The novelty song hit #1 on the R&B chart on July 11, 1960, unseating A Rockin Good Way (To Mess Around and Fall in Love), a duet by Dinah Washington and Brook Benton. Don’t feel bad, it took the top spot back the next week. There’s Something on Your Mind (Part 2) hit #31 on the Hot 100.

Marchan’s version started out as a 1957 recording by Big Jay McNeely called There is Something On Your Mind. This version hit #42 on the Hot 100 and #2 on the R&B chart. McNeely is credited as the song’s writer, but he purchased the song from John “Sonny” Harris, vocalist from the Rivingtons. Harris had lifted most of the song from the Highway QCs song Something on My Mind. 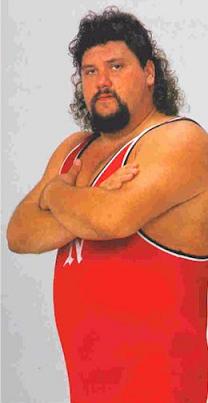 Gary Albright was born in Rhode Island and was a professional wrestler, performing mostly for the Stampede Wrestling in Canada, UWF International and All Japan Pro Wrestling leagues.

Albright began his accomplished amateur wrestling career in high school for Billings West High School in Billings, Montana. In 1980 Albright was the state champion. (In 1981 he placed second in the state.) In university, he wrestled for the University of Nebraska and set the state record for total falls (38 in the 1985/1986 season).

On January 7, 2000 Albright was wrestling at a World Arena Wrestling show in Hazleton, Pennsylvania in a match against Lucifer Grimm (real name Bill Owens). Albright was hit with a three quarter facelock bulldog move and collapsed to the canvas. Grimm rolled Albright on top of himself (out of concern) and ended the match. Attempts were made to resuscitate Albright to no avail. He was pronounced dead shortly after being removed from the ring. The official cause of death was listed as a heart attack. Medical examiners determined Albright was suffering from diabetes, had an enlarged heart and several of his coronary arteries were blocked. Since Albright died of natural causes, the police were not brought in. Albright was 36 years old and survived by his wife Monica, son Samuel and daughters Angelica and Alexandra.

Where Angels Fear to Tread (William Blackwood and Sons, 1905)

Originally entitled Montenano, Where Angels Fear to Tread is a novel by English author E.M. Forster.

Widow Lilia Herriton goes to Tuscany with friend Caroline Abbott. Lilia falls in love with Italy and a man, Gino. Furious, her in-laws send their son Philip to bring her back home. Philip is too late; she’s already married and pregnant. While giving birth, Lilia dies. The Herritons and Philip journey back to Italy to obtain custody of the infant so he can be raised a proper Englishman. Unfortunately, the infant also dies. How does the baby’s death affect everyone?

In 1991, Where Angels Fear to Tread was made into a feature film starring Rupert Graves, Helen Mirren, Helena Bonham Carter and Judy Davis. 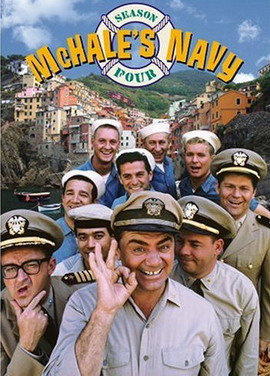 McHale’s Navy recounts the misadventures of a misfit PT Boat crew during WWII. While Lieutenant Commander Quinton McHale (Ernest Borgnine) and his crew are constantly engaging in wacky schemes to make money, have fun and gets girls, Captain Binghamton (Joe Flynn) is trying to rid himself of the PT-73 crew for good — either by transfer or court martial. Tim Conway starred as Ensign Parker, Bob Hastings was Lieutenant Carpenter.

In 1964, McHale’s Navy producer Edward Montagne made up a female version of McHale’s Navy, entitled Broadside. Broadside ran for 32 episodes. In 1997 another sequel of the series was released starring Tom Arnold. Each season of McHale’s Navy is separately available for purchase. As of November 2015, a complete series boxset is also available.