Gray Gordon and His Tic-Toc Rhythm band first recorded Ferry Boat Serenade with the B-side being I Could Make You Care.

Another horribly panned British film. Fire Maidens from Outer Space was a low budget British space opera film about a group of astronauts visiting an all-female society on a moon of Jupiter. The film is panned for its poor special effects and has been called the worst British film ever made. It starred Anthony Dexter, Susan Shaw and Paul Carpenter.

Happy Xmas was English musician Eric Clapton’s first Christmas album. The idea came from Clapton’s wife Melia three years ago urging him to make his own. Reluctant at first, he finally went and did it in 2018. Released in October 2018, it contains 13 covers of Christmas-themed songs arranged in a predominantly blues style with one new composition, For the Love on Christmas Day. The album cover and inner artwork for that matter was done by Clapton himself — inspired by Bob Dylan who often came up and devised his own album artwork. The lettering on the front as well as the track list on the back are Clapton’s own handwriting.

Historians debate the origins of paper airplanes. The ancient Chinese used papyrus paper to invent the kite, but their primitive designs likely did not resemble modern flight. Leonardo Da Vinci wrote about constructing a flying machine out of parchment. In the early 19th century, Sir George Cayley identified the four primary aerodynamic forces of flight and built kite-like gliders out of linen. Early attempts at constructing flying machines fascinated children and adults alike. The success of the Wright Brothers at Kitty Hawk in 1903 fostered renewed hope of powered flight and no doubt contributed to the purported invention, in 1909, of the paper airplane. The principles that make an airplane fly are the same that govern paper versions. Paper’s high strength and density make it similar, scale-wise, to the materials used to construct airplanes.

Where some toys require financial investment, paper airplanes start with a simple sheet of paper, coupled with dexterity, to produce a toy with infinite aeronautical possibilities. The paper airplane was inducted into the National Toy Hall of Fame in 2017. 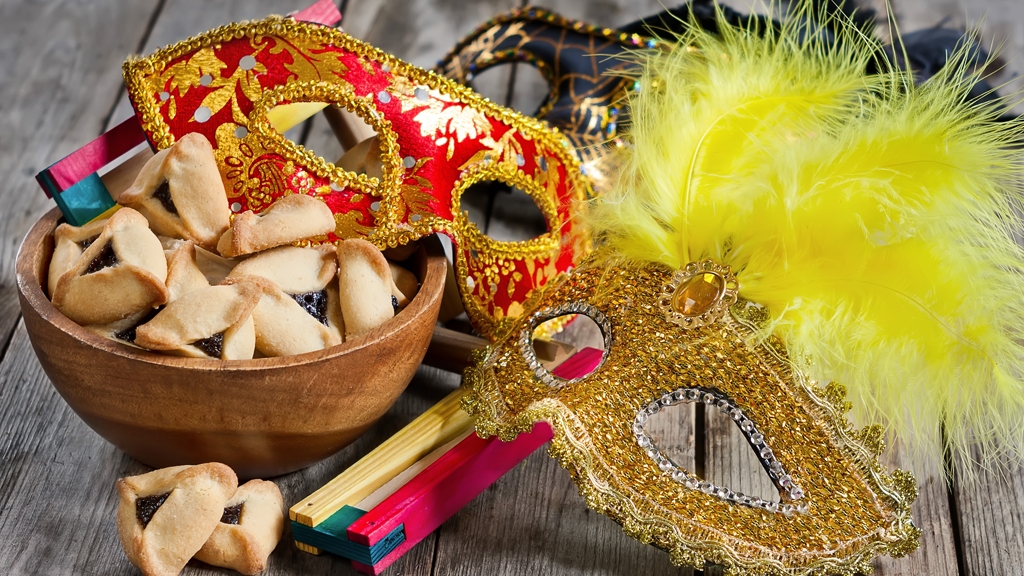 Purim occurred March 21, 2019 and will occur on March 10, 2020. Purim is a two day celebration that begins at sundown on the fourteenth day of Adar, the 12th month of the Jewish calendar. Purim is one of the most festive of the Jewish holidays. It is a commemoration of the salvation of the Jewish people in ancient Persia (during the 5th century B.C.) from Haman’s plot “to destroy, kill and annihilate all the Jews, young and old, infants and women, in a single day,” as recorded in the Megillah (book of Esther). Purim observances are to read the Megillah, to give gifts of money to at least two poor people, to send gifts of two kinds of food to at least one person and to have a festive Purim feast. Purim customs include children dressing (adults can too if they wish) in costumes and the consumption of hamantaschen (three cornered pastries bursting with poppy seeds or sweet fillings). It is also customary to fast the day before Purim. Children also shake noise makers called “Graggers.”

The Devil Went Down to Georgia appeared on the Charlie Daniels Band 1979 album Million Mile Reflections. The song’s verses are closer to being spoken than actually sung and tells the story of the devil who is unable to steal Johnny’s soul through a fiddle-playing contest. It became the band’s biggest hit, peaking at #3 in the U.S.

Kile Glover was the son of Tameka Foster and an Atlanta TV executive Ryan Glover. At the time of the accident and his death, Foster was married to R&B singer Usher though the couple was in the middle of a custody battle over the sons they had together during their relationship. On July 6, 2012, Glover and some family friends were playing on an inner tube that was being pulled behind a pontoon boat on Lake Lanier when a man on a jet ski ran over Glover and a 15-year-old friend. Glover was unresponsive when pulled from the lake. Both he and the teenager were flown to Children’s Healthcare of Atlanta. He never regained consciousness due to head injuries and died July 21, 2012 after being taken off life support. (The teenage girl also injured in the accident was treated for a cut on the head and a broken arm and released from hospital. Glover was also wearing a life preserver at the time of the accident.) Glover was 11 years old at the time of his death.

The Absolutely True Diary of a Part-Time Indian (Little, Brown and Company, 2007)

Author Sherman Alexie writes from his own personal experience when telling the story of teenage Junior who grew up on the Spokane Indian Reservation and left to attend an all-white high school in a farm town. The Absolutely True Diary of a Part-Time Indian won the 2007 National Book Award and the 2008 American Indian Youth Literature Award. It also contains art by Ellen Forney for the 65 comic illustrations that help to further the plot. However that didn’t stop the novel from ending up on banned book lists for objections to its strong language and racial slurs as well as topics of alcohol, poverty, bullying, violence and sexuality. Another breakfast menu item but with a twist. If you head into Chick-Fil-A, you can still get the Chicken Biscuit, but you cannot get the Spicy Chicken Biscuit anymore. What it was was a flaky, butter-laden biscuit with a spicy filet of chicken inside. They removed the Spicy Chicken Biscuit to make way for the Egg White Grill, which contains an egg white, grilled chicken breast and a slice of American cheese on a toasted nultigrain English muffin.

Debra! was a Canadian children’s TV series that focused on 14-year-old Debra Delong (Niamh Wilson) who partakes in adventures with her best friend Preston Lunford (Will Jester). Debra! ran for 13 episodes from June 4, 2011 to January 1, 2012.