101 Ways to Leave a Gameshow was a British game show on the BBC, airing from July 10 to August 28, 2010. Eight contestants competed for a 10,000 pound prize by picking the correct answer to general knowledge questions. Competitors that gave incorrect answers were eliminated in a variety of ways usually in a spectacular fashion. In the first four rounds of elimination, a buzzer could sound signalling an Emergency Exit round. Here, contestants were asked questions at random and the first wrong answer resulted in an elimination. For the final round, three contestants remain to answer one final question to win the jackpot. 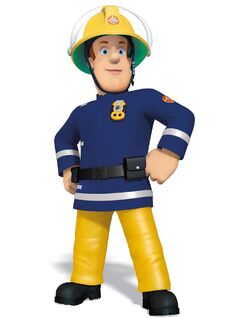 Fireman Sam was a Welsh animated comedy children’s TV series. The show (which aired in 10 minute segments) is about a fireman named Sam, his fellow firefighters and residents of the fictional Welsh rural village of Pontypandy (a portmanteau of real Welsh towns Pontypridd and Tonypandy). The idea for the show came from two real life firefighters from Kent, who took the idea to artist and writer Rob Lee to develop. Fireman Sam first appeared on the Welsh language channel, S4C in 1987, arriving on BBC1 later that same year. The original series ended in 1994. A new series with an expanded character cast began in 2003. Fireman Sam was also broadcast in Gaelic across Scotland. It should be no surprise that the series was used across the United Kingdom to promote fire safety. It has also been broadcast in 40 other countries around the world.

Sylvania Waters was one of the first reality TV programs to follow and document the lives of an Australian family. It was broadcast on the Australian Broadcasting Corporation on March 7, 1992. Sylvania Waters was co-produced by the BBC (British Broadcasting Corporation) and ran for 12 episodes, ending on June 28, 1992. Noeline Baker and Laurie Donaher lived at 48 MacIntyre Crescent in the Sydney suburb of Sylvania Waters. The crew followed the couple around for six months to document their newfound wealth and interpersonal conflicts.

Captain Pugwash is a fictional pirate from British children’s comic strips and books created by John Ryan. In 1957, he got his own animated BBC TV show, then a color TV show in the 1970s. In the 1950s series, the show used cardboard cut-outs and was filmed in live-action. Captain Pugwash was the first series to be performed and broadcast live.

Captain (Horatio) Pugwash sailed the high seas in his ship, The Black Pig, with his cabin boy Tom and pirates Willy and Barnabas and Master Mate. His enemy is Cut-Throat Jake, captain of the Flying Dustman.

There were a total of 87 black and white original episodes of Captain Pugwash. There were an additional 30 episodes produced in color.