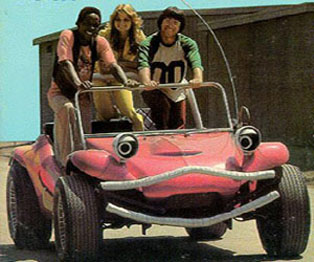 Wonderbug were segments that aired during the first and second season of the Krofft Supershow, airing from 1976 to 1978. Wonderbug was a conglomeration of several junked cars that resembled a rusty dune buggy. It was named Schlepcar due to its personalized license plate “SCHLEP.” Schlepcar was able to drive itself and talk in a mumbling voice. It could also transform into the shiny orange Wonderbug whenever a magic horn (that played the bugle call of the cavalry charge) sounded. While in Wonderbug mode, the car and the three teens who discovered it — Barry (David Levy), C.C. (John Anthony Bailey) and Susan (Carol Anne Seflinger) would outwit the forces of evil.

Wonderbug aired for 21 featurettes. In 1976, Aladdin Industries produced a Wonderbug metal lunchbox. In 1977 the Ideal Toy Company published a board game.

Milton the Monster was a Frankenstein-looking fellow who emitted various quantities of white steam depending on his moods. He was created by mad scientist Professor Montgomery Weirdo and his assistant Count Kook who lived in a haunted house on Horror Hill. Milton turned out to be a very smiley, good natured monster because Weirdo’s elbow was bumped by Kook when pouring the “tincture of tenderness” into Milton’s mold. Milton’s voice (Bob McFadden) was based on Jim Nabors’ Gomer Pyle.

In total, 26 episodes were produced. In March 2007, Shout! Factory released the complete series on DVD.

Time Simply Passes is a 2015 documentary film that chronicles the life and wrongful conviction of James Joseph Richardson. Time Simply Passes details the circumstances leading up to his 1967 arrest for the poisoning deaths of his seven children in Arcadia, Florida, the twenty-one years he spent in prison, his release in 1989 upon the discovery of hidden evidence and the twenty-five years he spent following his release attempting to obtain compensation from the state of Florida. Time Simply Passes is directed and produced by Ty Flowers who worked with his father Charles Flowers, a journalist who helped to free James through his work on the case in the 1980s. Time Simply Passes has won multiple awards from numerous film festivals. On the 50th remembrance anniversary in February 2018, the film was shown several times in Arcadia to honor the victims of the poisonings. Currently Time Simply Passes is available for streaming via Amazon Prime.

Marc Summers’ Mystery Magical Tour was an American television special that aired on Nickelodeon as a Halloween themed show. It originally aired in 1988 and continued airing at Halloween until 1996. The show was designed to show off the talents of stage magicians Lance Burton and Tina Lenert as well as capitalize on Marc Summers’ newfound popularity as host of the network’s game show Double Dare. Actors Shiri Appleby, Jonathan Brandis and John Astin all appear. The special was filmed at the Magic Castle in Los Angeles.

Back With the Ex was an Australian reality TV series which aired on the Seven Network on April 18, 2018. The premise of the show was chronicling former couples that want to give their relationships a second chance. The premiere (and only aired) episode featured Jeremy and Meg, Diane and Peter, Cam and Kate and Erik and Lauren. Each couple did reconcile for a bit but all have since broken up again. Seven episodes were filmed and Back with the Ex was supposed to have run until May 30, 2018. But ratings were poor so the remaining episodes were moved to Seven Network’s streaming channel.

Who’s Whose was a panel quiz TV show that aired on CBS on June 25, 1951 and is noted for being one of the first TV shows to be dropped after only airing for just one episode. Who’s Whose was hosted by Phil Baker and was assisted by a man in a turban dubbed “Gunga.” The celebrity panelists were Robin Chandler, Art Ford, Basil Davenport and Emily Kimbrough. The panelists were to guess which of the three male guests were married to which female guest. Who’s Whose was broadcast live.

Family Ties was an American sitcom that aired for seven seasons from September 22, 1982 to May 14, 1989. The series aired and reflected the move underway in the United States from the cultural liberalism of the 1960s and 1970s to the conservatism of the 1980s. Therefore, Family Ties honestly expressed the relationship between young Republican Alex P. Keaton (Michael J. Fox) and his ex-hippie parents Steven and Elyse Keaton (Michael Gross and Meredith Baxter). Throughout its run, Family Ties won numerous awards, including three consecutive Emmy Awards for Michael J. Fox as Outstanding Lead Actor in a Comedy Series. The cast was rounded by fashion-conscious/gossipy daughter Mallory (Justine Bateman) and tomboy youngest daughter Jennifer (Tina Yothers).