Indian Love Call (first published as The Call) is a popular song from Rose-Marie, a 1924 operetta-style Broadway musical with music by Rudolf Friml and Herbert Stothart, and book and lyrics by Otto Harbach and Oscar Hammerstein II. Originally written for actress and singer Mary Ellis, the song achieved continued popularity under other artists and has been called Friml’s best remembered work. The play takes place in the Canadian Rocky Mountains and features the sonorous tune in the overture and in Act One while the love interests call to each other per a supposed Aboriginal Canadian legend about how men would call down into the valley to the girls they wished to marry. In most (or all) versions of Rose-Marie, including the best-known movie version, the tune is reprised several times throughout the narrative. The musical was the longest running musical of the 1920s, enjoyed international success, and became the basis of four films with the same title. As the musical’s biggest hit, Indian Love Call outlived its origins. The song was said to have been a favorite of President Dwight D. Eisenhower.

Danielle Michelle “Diem” Brown was an American television personality, philanthropist, and entertainment reporter. She was best known as a recurring cast member on the MTV reality television series The Challenge. Brown founded MedGift, a website that provides a gift registry for patients and support pages to both people experiencing illnesses and their caregivers. She was an army brat in Baumholder, Germany before her family settled in the United States. She attended high school in Roswell, Georgia and obtained her bachelor’s degree in communications from Florida State University. She debuted on Real World/Road Rules Challenge: Fresh Meat in 2006, Brown competed in seven additional Challenges. In her debut challenge, filmed in November 2005, she revealed that she had been diagnosed with ovarian cancer, to the surprise of both the cast and the production company. Her final season of The Challenge, Battle of the Exes II, aired in early 2015.

In June 2012, after six years of remission, Brown’s ovarian cancer returned. She delayed treatment to harvest eggs before undergoing surgery to remove her ovary and receiving chemotherapy treatments. In 2013, Brown’s cancer once again went into remission. Brown ended chemotherapy in February 2013, and later competed in her seventh Challenge season, Rivals II, because she was told by doctors during her second bout with cancer that “seeing 2013 was not that likely.” Brown was diagnosed with cancer for a third time in June 2014, but initially shared this information with only close friends. Two months later (August 2014), while filming her eighth and final Challenge competition, Battle of the Exes II in Panama, Brown collapsed on set, and was immediately airlifted to a New York hospital, where doctors performed emergency surgery. Though it was widely reported that she was diagnosed with colon cancer, Brown stated that her ovarian cancer had metastasized to her colon and stomach. Brown died on November 14, 2014 at the age of 34. Brown was survived by her father and three siblings. 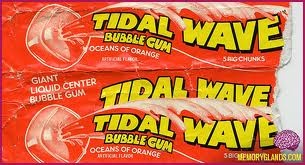 Tidal Wave bubble gum had a gooey liquid center that bit into would gush out. The flavor didn’t tend to last long. There were four flavors: orange, blueberry, grape and apple. (Fans of Tidal Wave have stated the apple flavor tasted and smelled like marijuana.) If you’re looking for a similar gum, check out Starburst gum.

Gilligan’s Planet was an American Saturday morning animated series produced by Filmation and MGM/UA Television. It was the second animated spin-off of the sitcom Gilligan’s Island (the first being The New Adventures of Gilligan). Gilligan’s Planet was the last cartoon series that Filmation produced for Saturday mornings. (They transitioned to producing cartoons exclusively for syndication.) It was one of the last 1980s Saturday morning cartoons to be fitted with an adult laugh track, as the popularity of the practice had subsided. Gilligan’s Planet featured all of the original actors but one; Tina Louise, who has consistently refused to participate in any Gilligan’s Island-related material since the series ended, again declined to reprise her role as Ginger Grant, who again was portrayed as a platinum blonde instead of Louise’s red hair. Dawn Wells, who had been unavailable during the production of The New Adventures of Gilligan, returned to the franchise, voicing both her own character (Mary Ann Summers) and Ginger.

Gilligan’s Planet is based on the premise that the Professor had managed to build an operational interplanetary spaceship to get the castaways of the original series off the island. True to the castaways’ perpetual bad luck, they rocketed off into space and crash-landed on an unknown planet that supported human life. In many ways, the planet was like the island, but with a strangely colored and cratered surface with more land to get around. The rocket was severely damaged in the crash; thus, the castaways were still stranded and the Professor resumed his attempts to repair their only way home.

Baby Got Back is a 1992 hip hop song written and recorded by American rapper Sir Mix-a-Lot, which appeared on his album Mack Daddy. The song samples the 1986 Detroit techno single Technicolor by Channel One. At the time of its original release, the song caused controversy with its outspoken and blatantly sexual lyrics about women, as well as specific references to the female buttocks which some people found objectionable. The song’s music video was briefly banned by MTV. It was the second best-selling song in the US in 1992, behind Boyz II Men’s End of the Road. The song debuted at number 75 on the Billboard Hot 100 chart dated April 11, 1992 and hit number one twelve weeks later. The single spent five weeks at the top of the chart.

The song came from a meeting between Sir Mix-a-Lot and Amylia Dorsey who saw little representation of full figured women in media. The idea came from the 1980s Budweiser commercial featuring very thin, valley girl-esque models. They decided to dedicate a song to the very opposite, featuring curvy women of color. Mix and Dorsey sought to, “Broaden the definition of beauty.”

Ice Age is an American media franchise centering on a group of mammals surviving the Paleolithic ice age. It consists of computer-animated films and TV specials and a series of video games. The films are produced by Blue Sky Studios, a division of 20th Century Fox Animation as a part of Walt Disney Studios (formerly 20th Century Fox). The series features the voices of Ray Romano, John Leguizamo, Denis Leary and Chris Wedge, who are the only constant cast members. Five films have been released in the series thus far: the original film of the same name in 2002, Ice Age: The Meltdown in 2006, Ice Age: Dawn of the Dinosaurs in 2009, Ice Age: Continental Drift in 2012, and Ice Age: Collision Course in 2016. As of April 2016, the franchise had generated $6 billion in revenue, making it one of the highest-grossing media franchises of all time.

I Am Me is the second studio album by American recording artist Ashlee Simpson. It was released in the United States on October 18, 2005 and debuted at number one in sales. The album produced two top 25 hits on the Billboard Hot 100, Boyfriend and L.O.V.E. Simpson worked with John Shanks and Kara DioGuardi on this album, as she did on her first album, 2004’s Autobiography. Shanks produced the album, and Simpson co-wrote all the songs with Shanks and DioGuardi. On December 15, I Am Me was certified Platinum by the RIAA for its shipments of over one million copies in the U.S.

I Am Me sold about 220,000 in its first week, according to Billboard; sales for the album declined 67% in its second week, when it sold about 73,000 copies and fell to number six on the Billboard 200. In its third week, the album sold about 54,000 copies, a sales drop of 25%, and it fell on the chart to number ten. Rolling Stone magazine grouped it among the numerous “heavily anticipated albums” of the season whose sales had “fizzled.” In the United Kingdom, in the absence of any promotion, I Am Me debuted at #160, selling just 1,392 copies in its first week. However, in late January 2006, Simpson went to the UK to promote Boyfriend, several months later than in the U.S.; the single was released in the UK on January 30, 2006, and hit #12 in its first week; also, the album climbed to #50 in the UK in mid-February 2006. 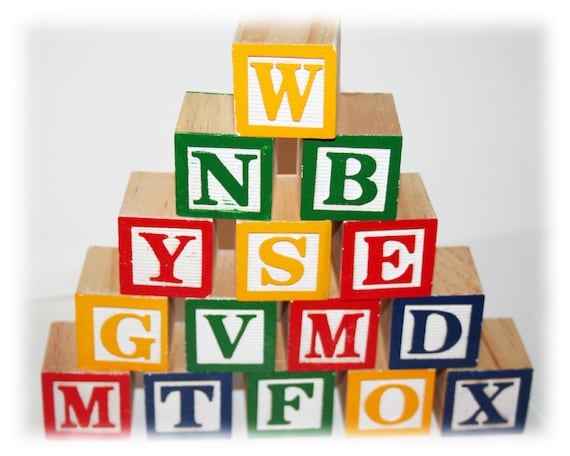 For centuries, parents understanding the connection between play and development have made alphabet blocks standard equipment of the well-stocked toy box. Alphabet blocks appeared as early as 1693, when philosopher John Locke pointed out that “dice and play-things, with the letters on them to teach children the alphabet by playing” would make learning to read a more enjoyable experience. A century and a quarter later, Friedrich Wilhelm August Froebel, a museum curator who pioneered kindergarten, introduced geometric solids carved from wood. Known as Froebel’s “gifts,” they soon led to alphabet blocks. In 19th century America, these toys found their way into most schools, marketed as tools to help children recognize shapes of letters before learning to read. Nowadays, virtually all American preschools and many home playrooms store alphabet blocks. Traditionally, homemade blocks prevailed. Currently, Uncle Goose Toys and Old Fashioned Blocks produce and manufacture this vividly colored toy. Parents may understand that these blocks carry educational value, but children like them because their colors delight the eye, their pictures provoke stories, and their numbers, patterns, and symbols look nice piled up. Alphabet blocks were inducted into the National Toy Hall of Fame in 2003. 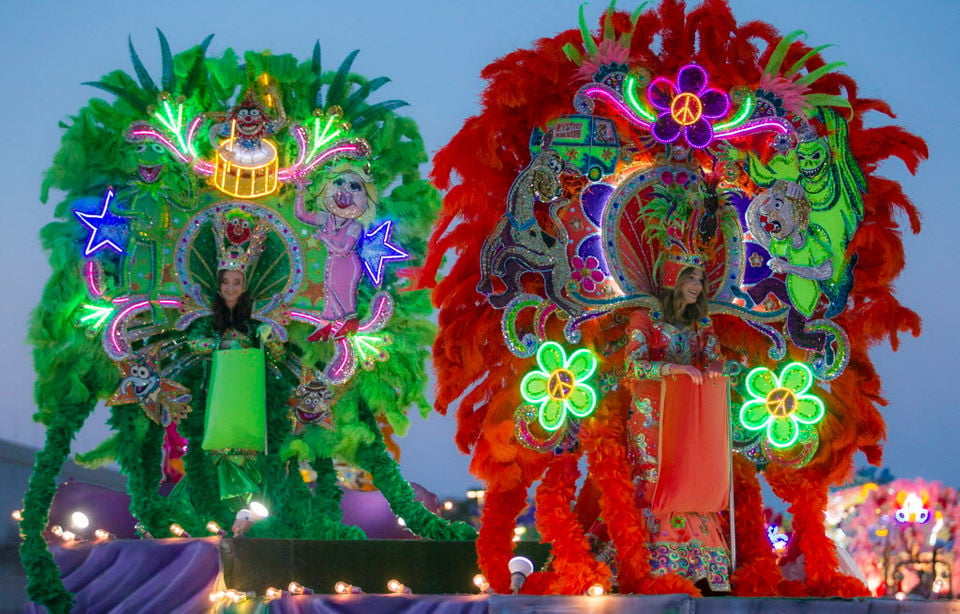 Also known as Fat Tuesday, Mardi Gras in New Orleans is a cultural spectacle to behold -– sort of like the U.S. version of Carnival. But there is some debate over whether it was NOLA or Mobile, Alabama that had the first Mardi Gras back in the 1700s. Regardless, few would argue that the New Orleans festival is the best. Though the celebration is held every year on the day before Ash Wednesday (February 26, 2020), the festivities last for months. It begins with social events in November, private balls held on Thanksgiving Day and New Year’s Eve, with parades and more private balls throughout January and early February. Getting invites to the private events isn’t easy. But if you know someone (or have the money to grease palms), MOM’s Ball and Orpheuscapade Ball are frequently ranked among the best. If you love music, check out the annual Galactic concert at the world-famous Tipitina’s on Lundi Gras (the day before Mardi Gras). When the big day arrives, it’s best to plan what you want to see and do before the parade of beads, boobs, and booze begins. Long time locals love the Krewe of Muses Parade, the Rex & Zulu Parade, and the Krewe of St. Anne and Krewe of Julu Parades.