Elvira: Mistress of the Dark is a 1988 American comedy horror film directed by James Signorelli. Cassandra Peterson plays the role of horror hostess Elvira in the character’s feature film debut. The screenplay was written by Peterson, John Paragon and Sam Egan. The plot: Los Angeles TV horror hostess Elvira quits her job after the station’s new owner sexually harasses her. She plans to open an act in Las Vegas, but needs $50,000 for the project. Upon learning she is a beneficiary of her deceased great-aunt Morgana, she travels to Fallwell, Massachusetts, to claim the inheritance, which includes a mansion, a recipe book and Morgana’s pet poodle, Algonquin.

Hopscotch is a 1980 American spy comedy thriller film, produced by Edie Landau and Ely A. Landau, directed by Ronald Neame, that stars Walter Matthau, Glenda Jackson, Sam Waterston, Ned Beatty and Herbert Lom. The screenplay was written by Bryan Forbes and Brian Garfield, based on Garfield’s novel of the same name. Former CIA field officer Miles Kendig (Matthau) is intent on publishing an explosive memoir that will also expose the dirty tricks of Myerson (Beatty), his obnoxious, incompetent and profane former boss. Myerson and Kendig’s protégé Joe Cutter (Waterston) are repeatedly foiled in their attempts to capture the former agent and stop the publication of his memoir. He cleverly stays one step ahead of his pursuers as the chase hopscotches around America and western Europe. Matthau received a Golden Globe nomination for Best Actor – Motion Picture Musical or Comedy.

Two guys find out the hard way that sneaking into the wrong party can cause serious problems in this American comedy. Jeremy Klein (Vince Vaughn) and John Beckwith (Owen Wilson) are a pair of long time friends who work for a law firm, helping contentious couples mediate their divorces. Their job has given them a cynical attitude about marriage, and as a hobby each weekend the two make a point of crashing wedding receptions, where they load up on free food and booze and try their luck at seducing bridesmaids. Wedding Crashers also stars Christopher Walken, Rachel McAdams, Isla Fisher, Bradley Cooper and Jane Seymour. It was a worldwide smash, bringing in $285 million and is credited with reviving the popularity of adult-oriented, R-rated comedies. Barbara Mackay is an American musician who trained in piano and violin at Juilliard and the Manhattan School of Music. When she moved into pop music, she really let her sense of humor loose. Her first pop music foray was a five-part female singing group, The Girl Scouts. She moved on to a musical theater troupe, Little Lulu and the Humpers. With her own band Mackay released her debut album, Hot Box. Two singles were released: It’s All Rite to Fuck All Nite and Give Your Dick to Me. Yep. Unsurprisingly both singles had to be heavily censored before they could receive airplay. Other songs included: Eat Me, Vibrator Blues, Sessame Snatch, Whore House Blues and Lesbians Lament. There are more on the album as well. The album is listed as a comedy album and was dedicated to Rabelais, Bessie Smith, Lenny Bruce and all the other mothers who liberated our language by making people laugh.

Mackay has since switched genres again thanks to the singles from Hot Box finding commercial success in Europe. She now writes world music and new age. Mackay’s most recent album was 2008’s Heaven and Earth.

Lock, Stock, and Two Smoking Barrels is a British crime comedy thriller directed by Guy Ritchie that brought Ritchie international acclaim and nominated for a BAFTA (British Academy Film Award) as Outstanding British Film of the Year. It tells the story of a botched London card game that triggers four friends (Jason Flemyng, Dexter Fletcher, Nick Moran and Jason Statham), thugs, hard gangsters, loan sharks and debt collectors to collide with each other in a series of unexpected events, all for the love of weed, cash and two antique guns. The film was Statham’s first film role. Lock, Stock, and Two Smoking Barrels was produced for a astounding 800,000 pounds ($1.35 million U.S.) and brought in over #28 million, making it a huge commercial success.

In Ghost Town Ricky Gervais plays a dentist who can see dead people and is doomed to help them with their love problems, most especially Gwen (Tea Leoni), a widow who recently lost her husband, Frank Herlihy (Greg Kinnear).

Ghost Town was directed by David Koepp who also co-wrote the screenplay with John Kamps. The fantasy comedy film was made for $20 million, bringing in $27.1 million. 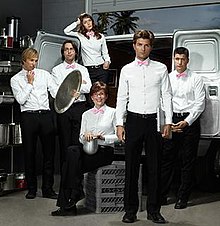 Party Down followed a group of actors that moved to Los Angeles with the hope of making it in Hollywood but, instead, end up having to make ends meet by working as caterers for the company Party Down. The American comedy series starred Adam Scott, Ken Marino, Jane Lynch, Ryan Hansen, Martin Starr, Lizzy Caplan and Jennifer Coolidge. Megan Mulally joined the series for the second season. The series ran for two seasons and a total of 20 episodes. In 2012, the first rumors sprang up about a possible film adaptation. In 2015, Scott shot down the idea saying that, if anything, there would be new episodes of the show but that a film would be extremely unlikely.

Party Down was cancelled on June 30, 2010. Critics loved the show, but the public did not — enough. (Though it did have a cult following.) Party Down lost actress Jane Lynch to Glee so she was mostly able to participate in season 2. Then actor Scott had to leave for his commitment to Parks and Recreation. Unfortunately, these two character losses were also believed to be nails in the coffin for Party Down.

Steve Martin (Neal Page) is just trying to get home for Thanksgiving when a blizzard grounds him. He is also hampered by his traveling companion, John Candy (Del Griffith). In usual movie fashion, whatever can wrong does as the two men try to make it to Chicago in this John Hughes classic comedy.

Planes, Trains and Automobiles was made for $30 million and brought Paramount $49.5 million back.