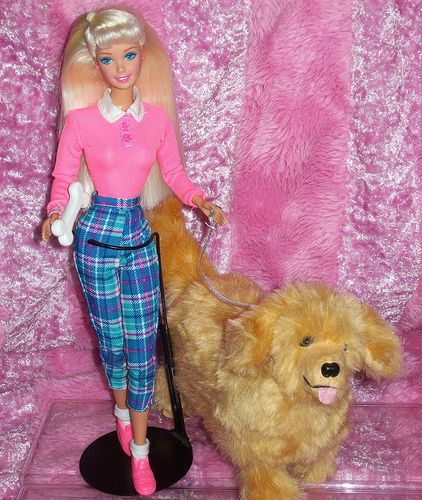 In the late 1990s, Mattel introduced Ginger, Barbie’s pet dog. Ginger (with the help of batteries) actually walked and barked. If you give Ginger her (included) bone, she would really pull Barbie on her (included) skateboard. As well, Ginger could wag her tail, carry the (included) newspaper, growl when you gave her her (included) doll and pant when you brushed her with the included brush. Also included in the set was a (stocked) dog dish, a frisbee and an (empty) box of Milk Bones.

In 1982, Mattel produced Baby Skates, a wind up doll that did actually roller skate. The doll was 15 inches tall and wore a pink and yellow tank top with pink and yellow trimmed shorts. She came with yellow elbow and knee pads. Her roller skates were white with red stripes and yellow wheels. As a wind up, you did not need batteries. This is a feature that makes her quite rare. She came in both a Caucasian and African American version. 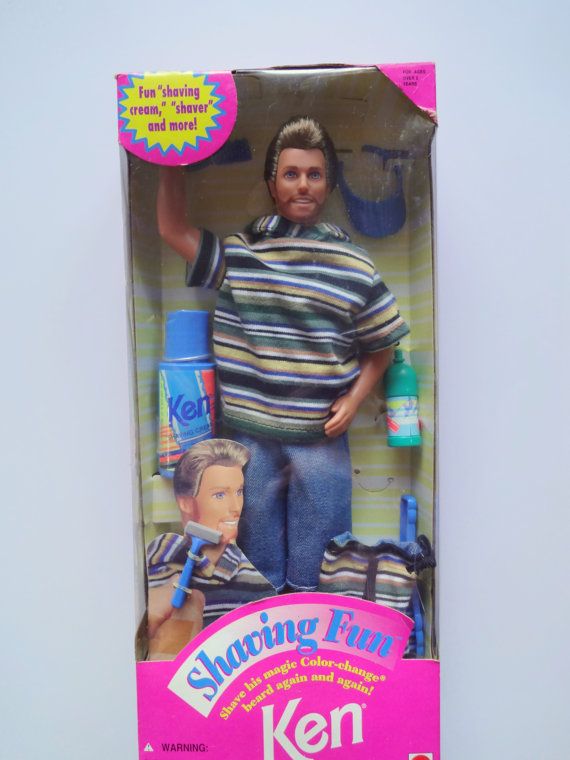 Not to be outdone by girlfriend Barbie who constantly comes in different incarnations, in 1995, you could have played with Shaving Fun Ken doll. Yep, Ken had a beard. He came with a jar of shaving cream that you were to rub on his beard. Using the foam “razor,” dipped in warm water first, you shaved away the unsightly beard and voila, Ken was now able to look his best self for Barbie and their big date.

In 1975, Mattel decided that it was time for Barbie’s little sister Skipper to grow up. After much research, they decided on this: Rotate Skipper’s left arm and Skipper would grow an inch taller and develop a bosom.

Growing Up Skipper created some controversy and Skipper stopped aging.

In the late 1980s, Nickelodeon began airing what became a popular children’s game show, Double Dare. On the show, it sometimes got messy from “Gak.” In 1992, Mattel began to manufacture their own compound of Gak. In 1994, Gak was re-issued in the Nickelodeon Deluxe Gift Set that had one can of Gak and two cans of Floam. Gak made a “fart” noise when you squeezed it into its clear star-shaped can.

Gak is a putty toy and modeling compound that comes in various colors. Over the years, Gak has ceased production numerous times only to make numerous short-lived comebacks.

After a mention on a November 2012 episode of the animated My Little Pony: Friendship is Magic series, Gak was re-launched.

Just be careful who you ask to provide you with Gak. Gak is a street name for heroin. Nickelodeon probably wouldn’t have used the name “Gak” for the product, but they were unaware of the term’s use in drug culture.

Children have always played (and been fascinated) with spinning tops. In 1969, Mattel re-introduced the top via the Wizzer. Wizzers use a super-spinning, high-tech bearing that makes these tops spin at very high speeds and remain standing (and spinning) for a longer period of time. You also didn’t need the strings to help the Wizzers achieve their high speed, making them “easier” to play with.

Wizzers remained popular through the 1980s, then pretty much fell off the map. They are still available, check out the selection from Duncan, the yo-yo company (http://www.yo-yo.com), under the category of Gyroscopes.

Major Matt Mason was a Mattel action figure. He was an astronaut that worked and lived on the moon. He had a crew of four. (Mason has a dark brown crew cut and wore white.) Sgt. Storm had blond hair and wore red. Doug Davis had brown hair and a yellow suit. Lt. Jeff Long was African-American and wore blue. Each figurine had a removable helmet that were based on early NASA helmets. Unfortunately Mason figurines were susceptible to breakage at the elbow, knee or hip joints.

Four aliens (Captain Lazer, Callisto, Scorpio and Or) were later introduced as the Mason crew took on more of a general science fiction theme. In the 1970s, when interest in the space program was declining, the Mason crew were sent to retirement. Today, the crew is a boon for collectors when they can find them in mint condition.

Battling Tops was a children’s game re-named in 1977 to Battling Spaceships to capitalize on the Star Wars theme. In 1982 Ideal was bought by Marx. They discontinued the game a few years later. Recently, Mattel has brought Battling Tops back to the marketplace.

The object of Battling Tops is to have your top be last one standing and spinning. The tops spin on a circular concave arena with four launch positions. Players wind a string (attached to a pull tab) around their top and place it on the launch position. To release the top, you simply pull the tab. The concave shape of the arena forces the tops to spin towards each other “to battle.” The winner is the first player to win ten battles.

Rainbow Brite was created by Halllmark Cards, specifically by Garry Glissmeyer and Lanny Julian. Mattel was brought in to handle the dolls and toy licensing while DIC Animation of France handled the TV cartoons. NBC was awarded the broadcast rights.

A little girl named Wisp is brought
to a colorless land. To bring back the color, she must find the Sphere of Light. She befriends a Sprite named Twink and a white horse named Starlight. Wisp finds the Color Belt and rescues the 7 Color Kids (Red Butter, Lala Orange, Canary Yellow, Patty O’Brien, Buddy Blue, Indigo and Shy Violet). She uses the Belt to defeat the King of Shadows and is renamed Rainbow Brite. They all live in Rainbow Land and are in charge of all the colors of the universe. Each Color Kid is in charge of their respective color and the Sprites mine Color Crystals from the Color Caves which are turned into Star Sprinkles.

There were 13 episodes produced for the TV series. It aired from June 27, 1984 to July 24, 1986. There were also 2 half-hour live-action episodes, 4 read-along videos and a feature-length movie produced.