The Best of Shaquille O’Neal was the first compilation album (and his third overall) of NBA player turned rapper Shaquille O’Neal. It was O’Neal’s last album with Jive Records and just days after its November release, his third studio album (and fourth overall), You Can’t Stop the Reign was released on Interscope Records. The Best of Shaquille O’Neal contains “hits” from his first two albums, Shaq Diesel and Shaq-Fu: Da Return. I say “hits” because O’Neal only had top 40 hit, (I Know I Got) Skillz. Though he did have a few top 10 Rap chart hits (I Know I Got) SKillz</i), I’m Outstanding and No Hook peaked in the top 20 on the Rap chart. Untitled was American rapper Nas’ ninth studio album. No, he didn’t get lazy when naming the album nor was he out of creative head space. He wanted to call it something not fit to print, but allegedly bowed to pressure from the White House to change it from the racial epithet that he was planning on using. (Use your imagination…the word starts with the letter N…) Untitled was his fifth album to debut at #1 and was certified Gold.

Nas first mentioned the original title on October 2007. (Def Jam provided no comment.) In May 2008 he cheekily bowed to the pressure stating “…the people will always know what the real title of this album is and what to call it.” The cover art shows a shirtless Nas with his back to the camera with flagellation scars forming the letter N.

The singles from Untitled are: Hero, peaking at a dismal #97 and Make the World Go Round which failed to chart.

The lead single from American rapper Kreayshawn’s debut album, Somethin Bout Kreay, Gucci Gucci was released in June 2011 and contained a sample of another Kreayshawn song Bumpin Bumpin. Gucci Gucci peaked at #57 in the U.S. A moderate hit in the UK (peaking at #22 on the R&B chart and #77 on the Pop chart), a remix was released featuring British rapper Giggs. The single was responsible for landing Kreayshawn a recording contract with Columbia. 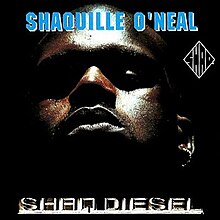 Though better known as the center for the NBA basketball team the Orlando Magic, in 1993 Shaquille O’Neal added a new job title to his resume: he became a rapper with the release of his debut album, Shaq Diesel. Despite the mixed to negative reviews, it reached Platinum status when it sold a million copies. The two singles off the album were moderate top 50 hits. (I Know I Got) Skillz was certified Gold and peaked at #35, while I’m Outstanding hit #47. The album itself peaked at #25 on the album chart (#10 on the R&B/Hip Hop album chart).

I Like That was American rapper Houston’s debut single off his debut album, It’s Already Written. I Like That featured Chingy, Nate Dogg and I-20 and was all over the place in 2004. It was even used in an ad for McDonald’s. I Like That peaked at #3 on the R&B chart, #11 on the Hot 100, #4 in New Zealand and #5 in Switzerland. I Like That was certified Gold in the U.S. and Australia.

Life didn’t stay so rosy for Houston though. In 2005, he suffered a breakdown and tried to commit suicide by jumping from a window while under the influence of PCP. He was restrained by his team and locked in a first floor room. While in there, he gouged out his own left eye with a plastic fork. Rapper’s Delight peaked at only #36 on the Hot 100 (but hit #4 on the Hot Soul Singles chart). The single went to the top of the Canadian and Dutch charts and hit #3 in the UK. Rapper’s Delight has sold over 5 million copies, but has never received its U.S. Diamond certification. Sugarhill was such a small, independent label that they didn’t hire outside accountants to go through their books. Rapper’s Delight has been certified Gold in Spain.

CrazySexyCool was TLC’s second album. It peaked at number three on the Billboard 200 album chart and kept right on charting for the next two years! CrazySexyCool contained two number one singles and won two Grammy awards for the girls. CrazySexyCool holds the distinction of being the first album by a girl group in history to be awarded Diamond status. Selling over 23 million copies worldwide, CrazySexyCool is the best selling girl group album in the U.S. Worldwide, it sits at number two (the 1996 debut album by the Spice Girls Spice is number one).

CrazySexyCool marked a slight departure of sound for TLC. Their debut album Ooooooohhh…On the TLC Tip was more rap oriented while CrazySexyCool saw the girls experiment more with an R&B sound. As such, more vocals were done from Tionne “T-Boz” Watkins and Rozonda “Chilli” Thomas with less raps from Lisa “Left Eye” Lopes. CrazySexyCool refers to each of the girls’ personalities — Left Eye being the crazy one, Chilli being sexy and T-Boz being the cool one.

In quite another feat, all four singles reached the Top 5 on the Billboard Hot 100 chart. Creep spent four weeks stop the Hot 100 and went to number one on the R&B/Hip Hop chart. Creep became the third biggest single of 1995. Red Light Special peaked at number two. Waterfalls spent seven weeks at the top of the Hot 100 and was the second biggest single of 1995 and remains TLC’s most successful single to date. The final single release Diggin on You peaked at number five.

CrazySexyCool won as Best R&B Album and Creep won as Best R&B Performance by a Duo or Group with Vocals at the 1996 Grammy awards. At the 1995 Billboard Music Awards, TLC were honored as Artist of the Year.

It hasn’t always been roses for TLC. After the release of their third album, Fanmail in 1997, Left Eye toyed with the idea of leaving the group and actually recorded her debut solo album, Supernova. Before completion of her second album, Lopes was killed in a car crash in La Ceiba, Honduras on April 15, 2002. TLC’s final album with Lopes, 3D was released in November 2002. After Lopes’ death, TLC decided to retire.

The enduring love from their fans led to T-Boz and Chilli reuniting for concert series/tours over the ensuing years. They signed a contract with Epic Records and released a compliation album, 20 in 2013. Currently, T-Boz and Chilli are working on their fifth album, due out sometime in 2014.

This was the third ingle from Nick Cannon’s self-titled debut album. Gigolo featured R. Kelly and peaked at #24 on the Hot 100. It’s best chart position was on the Hot Rap Tracks at #9.

Cannon is an American actor, comedian, rapper, radio/TV personality. He started his career as a teenager on the Nickelodeon sketch comedy/variety show All That (see cast photo below). He also formed the rap group Da G4 Dope Bomb Squad. They opened for Will Smith, LFO, 98 degrees and Montell Jordan. He signed with Jive in 2001 and released his first album in 2003. He started his own record label in 2005.

Cannon currently serves as host for America’s Got Talent, continues recording and serves as a creative consultant for Nickelodeon. He is currently married to singer Mariah Carey.