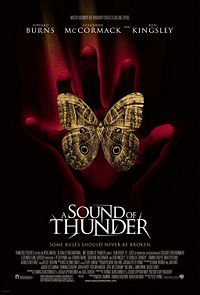 A Sound of Thunder was originally announced in 2001. It was to be directed by Renny Harlin and star Pierce Brosnan. Bradbury fired Harlin after a dispute and Brosnan moved on too. During post-production, Franchise Pictures went bankrupt. The remaining backers only ponied up $30 million instead of the $80 million they were supposed to have. This led to shoddy special effects (as well as terrible performances and scientific errors) that tanked this film. A Sound of Thunder grossed just under $2 million in the U.S. and over $11.5 million worldwide.