Wonka Oompas are now the name of fruit candy, but back in its inception in the 1970s, the Wonka Oompas were half filled chocolate and peanut butter candy pieces. They were about the diameter
of a quarter and they bulged in the middle. 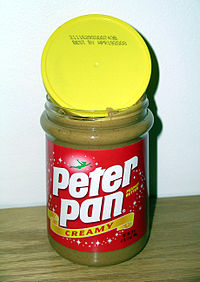 In February 2007, Peter Pan and Great Value (Wal-Mart’s store brand) of peanut butter were linked to 425 cases of salmonellosis across the U.S. and were recalled. (This was believed to be the first time a Salmonella outbreak occurred involving peanut butter in the U.S.) In January 2009, another peanut butter recall occurred when the Peanut Corporation of America recalled 21 lots of peanut butter from their Blakely, Georgia plant over another possible Salmonella contamination. Peter Pan responded by confirming that no ingredients they use to make their peanut butter come from any location operated by the Peanut Corporation of America, though the recall did effect some Peter Pan jars.

In a tribute to the King of Rock and Roll to commemorate the 30th anniversary
of his death, Hershey’s produced a collector’s edition of their famous peanut butter cups: Peanut Butter and Banana Creme. Elvis loved peanut butter and banana sandwiches, but if you were able to get your hands on this, did you? A definite rare item; I never even knew these existed. The King Size Big Cup was also available — which would make total sense. (Elvis was known as the King, right?)

Magic Middles were fully closed cookie pockets containing chocolate or peanut butter. How did they get the filling in there? The elves say “magic.” (Hence, “Magic” Middles.) For an even shorter period of time, Keebler produced a Mini Middle, bite-
sized Magic Middles.

Rumors suggested that the Middles disappeared because health-conscious parents complained the products were too rich. The truth is, Keebler factories needed the machines to produce another product line. Middle fans rejoiced a few years ago when Keebler said they would re-produce the Middles. They were soon disappointed when Keebler failed to produce them.

PB Max was a candy bar created and produced by the Mars Company (which makes Mars bars, Twix, Snickers, M&Ms, among others), PB Max was creamy peanut butter that sat atop a square-shaped whole grain cookie, covered with milk chocolate and cookie crumbles. PB Max was designed to compete with Hershey’s Reece’s Peanut Butter Cups. PB Max were sold as single bars or in a box of 6 bars. PB Max performed well, but the discontinuation of PB Max is definitely strange.

PB Max had brought in $50 million, yet Mars Inc. discontinued the candy bar sometime between 1992 and 1994. Why? According to a former Mars executive, PB Max was discontinued because of “the Mars family’s distaste for peanut butter.” What? PB Max lovers have tried (in vain) to change Mars’ mind with petitions over the years (some are still active).

I guess Hershey can rest easy, they will never have peanut butter competition from Mars.

PB Max fans, make sure to scroll down to take a look at the comments. You have a chance to bring PB Max back!