Yes, let your kids play with a hammer! Okay, wait, it’s an inflatable hammer that squeaks when it strikes anything, so it isn’t actually that dangerous. However, I did find this on a list of
inappropriate toys (not a safety hazard list). So why is this inappropriate? Well from where the spigot is located. There’s Wolverine at the bottom of the handle. And there the spigot is on Wolverine’s front by his (sigh) crotch. Because boys wouldn’t notice? And girls….oh dear.

In 1968 a furniture designer in California, Charles Prior Hall, was working on creating the world’s most comfortable chair. Since bean bag chairs were all the rage, Hall filled an inflatable bag with 300 pounds of liquid corn starch. When he sat in it, he found he sunk too low that he felt he was being swallowed by the chair. He replaced the starch with Jell-O. This became lumpy and uncomfortable. He scrapped the chair idea and filled a rectangular piece of vinyl with water, creating the waterbed. This took off like gangbusters. 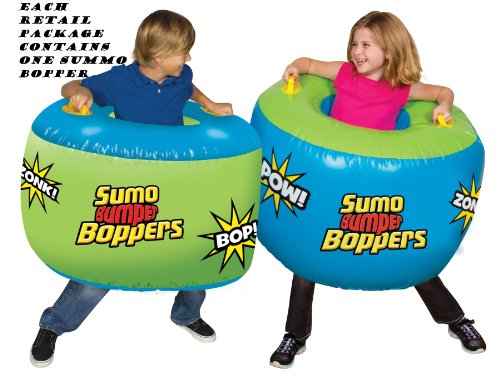 Remember those bop bags where you punch it and it pops right back for more? The Sumo Bumper Bopper use somewhat of the same principle. This toy lets your child fulfill their wish to be sumo wrestlers without all that nasty weight gain. Slip inside an inflatable bopper and knock your friends out of the circle. They are made to protect kids if or rather WHEN they fall. Looks like hours of fun! Babies adore water and these adorable boats seemed like a great way for babies to enjoy being in the water without drowning. Except that they weren’t. These boats were unfortunately cheaply made and the inflatable toys actually tore very easily and dozens of babies plunged right through into the water. Unfortunately the story gets worse.

Manufacturer Aqua Leisure was well aware of the problem. Instead of fixing it permanently, every time (which was all the time) they received a complaint , they would slightly tweak the design and the name they were sold under so they could keep selling them. No recall was ever made! In fact, they withheld complete information about the defect from the federal government. They were eventually fined $650,000 for knowing about the problem for an astounding 6 years and hiding behind the justification for continuing to produce the product by saying “but no babies have actually died yet.” Despicable.

Bop Bags rose to fame in the 70s and have yet to go out of style. Bop Bags are inflatables that are blown up and allow children to punch them. A weighted bottom helps the toy to bounce back up into place to take another punch.

Bop Bags come in a variety of styles, from animals to old school celebs (Bozo the Clown) to licensed characters (Lightning McQueen, Marvel’s Avengers, etc.) and there’s even pictures of a President Obama Bop Bag.

The Hoppity Horse (popular in the 70s) was a yellow inflatable rubber ball with a horse head that had handles coming out of its head. You could also get Mickey Mouse or Donald Duck inflatables. Though this wasn’t the best toy in terms of safety, those young children of the 70s still rave about this toy. For the horses that are still alive and lucky enough to have an owner, they still remain a hit with children of today.