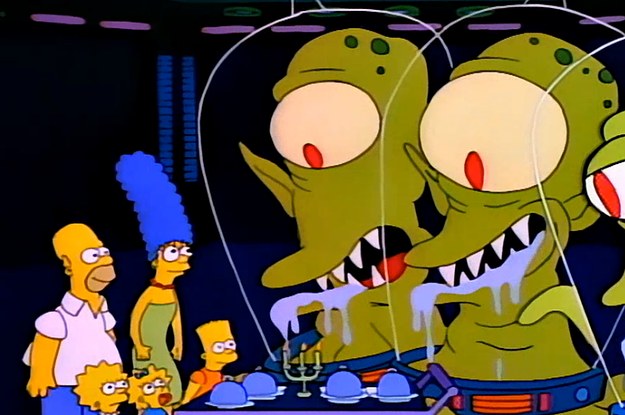 Treehouse of Horror are the collection of Halloween-themed episodes of the animated series The Simpsons. Each Treehouse of Horror episode consists of three separate, self-contained segments. These segments usually involve the Simpson family in some horror, science fiction, or supernatural setting. They take place outside the show’s normal continuity and completely abandon any pretense of being realistic, being known for their far more violent and much darker nature than an average Simpsons episode. The first, entitled “Treehouse of Horror”, aired on October 25, 1990, as part of the second season and was inspired by EC Comics horror tales. Since then, there have been 29 other Treehouse of Horror episodes, with one airing every year. Episodes contain parodies of horror, science fiction, and fantasy films, as well as the alien characters Kang and Kodos, a special version of the opening sequence, and scary names in the credits. The show’s staff regard the Treehouse of Horror episodes as being particularly difficult to produce, as the scripts often go through many rewrites, and the animators typically have to design new characters and backgrounds. Many of the episodes are popular among fans and critics of the show and have inspired a whole offshoot of Simpsons merchandise, including action figures, playsets, video games, books, DVDs, comic books, and a special version of Monopoly. Several of the episodes have won awards for animation and sound editing. In 1996, 2013, and 2015, Treehouse of Horror VI, Treehouse of Horror XXIII, and Treehouse of Horror XXV were respectively nominated for the Primetime Emmy Award in the “Outstanding Animated Program (for Programming Less Than One Hour)” category. Some TV stations feature Treehouse of Horror marathons around Halloween.

If there’s one trope that typifies the 80s, it’s the slasher film: a relentless antagonist hunting down and killing a bunch of kids in ever-increasing inventive ways, one by one. Arguably kicked off by The Texas Chain Saw Massacre in 1974, the output became prolific over the next decade. For every ten generic slashers, however, there was one flick that would end up becoming a cult classic even if critical success was mixed at the time, Halloween, Friday the 13th and A Nightmare on Elm Street are the most prominent examples. They became so successful that they spawned their own long-running franchises (the first time in the history of the genre that multiple sequels became commonplace.)

Marc Summers’ Mystery Magical Tour was an American television special that aired on Nickelodeon as a Halloween themed show. It originally aired in 1988 and continued airing at Halloween until 1996. The show was designed to show off the talents of stage magicians Lance Burton and Tina Lenert as well as capitalize on Marc Summers’ newfound popularity as host of the network’s game show Double Dare. Actors Shiri Appleby, Jonathan Brandis and John Astin all appear. The special was filmed at the Magic Castle in Los Angeles.

Halloween was a 1978 slasher movie directed and scored by John Carpenter and starred Donald Pleasence and Jamie Lee Curtis in her film debut. Halloween is the first installment of the franchise. The film had many imitators and unlike any of them, Halloween contained very little graphic violence or blood. It was one of the first horror films to
introduce the concept of the killer dying and coming back to life (within the same film). Halloween was produced for $300,000 and brought back in $47 million (the equivalent to $265.9 million today). At the time, Halloween became one of the most successful independent films.

The plot sees a young Michael Myers killing his older sister on Halloween night 1963. He is sent to Smith’s Grove Sanitarium from which he escapes on October 30, 1978 and returns home to begin killing again.

Mountain Dew Pitch Black was a dark purple colored grape flavored Mountain Dew that was released for the 2004 Halloween season. It was only produced in 2004 and quickly disappeared.

In 2011, Mountain Dew was in the midst of their “Back by Popular DEWmand” promotion and Pitch Black reappeared. They also released it in New Zealand markets. In the U.S., Pitch Black was only available for the summer. In New Zealand, it disappeared in 2012. If you’re a fan and are going to Malaysia, Singapore or the Philippines, stock up.

Happy Halloween everyone from all of us here at Walk Memory Lane! Have a happy and a safe evening however you’re celebrating. We’ll see you back here on Sunday. 🙂