Jimmy Hoffa was born in Brazil, Indiana. One of the most famous labor leaders in American history, he quickly rose through the ranks of the Teamsters Union, culminating in the office of president. In 1967, Hoffa went to prison for jury tampering, fraud and conspiracy. He disappeared in 1975 and is presumed dead.

Hoffa’s childhood had a profound impact on his adult life. His father was a coal miner who died when Hoffa was still a youngster. This caused his mother to have to go to work to support her family of four children. Obtaining a limited education (there are still conflicting reports about whether Hoffa reached high school), he did at some point drop out of school in order to help his mother support the family. He took a job on a loading dock for a grocery store chain in Detroit (where the Hoffa family had to relocate to after Hoffa’s father’s death). There, he staged his first labor strike to help the employees get a better contract. (He used a newly delivered shipment of strawberries as his bargaining tool. The strawberries would not be moved until they had a better deal.)

Hoffa joined the Teamsters Union in the 1930s and became vice president of the entire organization in 1952. Five years later, he was president. Hoffa was often under the watchful eye of the FBI as they were considered that the Teamsters may have been assisted by organized crime, but for the most part, Hoffa was able to keep his nose clean and avoid legal troubles. The Justice Department tried many, many times to indict him, but they often failed to win the cases against the popular labor leader, until his 1967 conviction of jury tampering, fraud and conspiracy which sent Hoffa to prison for 13 years. President Ronald Reagan commuted Hoffa’s sentence in 1971. Nixon banned Hoffa from holding a leadership position with the Teamsters until 1980.

On July 30, 1975, Hoffa left his Detroit home to meet with a local crime figure and mob-connected New Jersey union leader at a restaurant in Bloomfield Township. They were supposed to be settling an old score. Hoffa was the only one who showed up. What happened to Hoffa after that is not known. His car was found in the restaurant’s parking lot, but the car contained no clues as to Hoffa’s whereabouts. Hoffa was declared legally dead in 1982.

Hoffa married Josephine Poszywak in 1936. The couple had two children, daughter Barbara and son James. James has followed in his father’s footsteps; he has been the president of the Teamsters since 1998.

Perhaps better known as the Brown Bomber, Joseph Louis Barris would soon become the heavyweight champion of the world. A title he held for 12 years, a boxing record, and posted
25 successful title defenses. Louis was born near Lafayette, Alabama. He was the 8th child in his family. At age 2, his father was committed to a state hospital. Receiving little education, as a teen Louis worked odd jobs. When his family relocated to Detroit, he worked at the River Rouge plant of the Ford Motor Company. For a while he considered a career in cabinet making. Louis also took violin lessons. At school a friend recommended he try boxing. By 1934 he held the title of National Amateur Athletic Union Light-Heavyweight. His amateur career record was 43 knockouts in 54 matches.

In his first year as a pro, by the end of 1935, he fought 14 matches and won $370,000 in prize money. His first professional defeat was on June 19, 1936 to Max Schmeling, a German boxer and a former heavyweight champion. Louis would himself win that title on June 22. 1937 by defeating Jim Braddock, whom he knocked out in the 8th round. Louis would continue to hold that title for 12 years.

On March 1, 1949, Louis retired. He became broke shortly after. Louis briefly (and miserably) returned, before retiring for good on October 26, 1951. Money was a constant issue for the remainder of his life. He tried wrestling and even set up a chain of interracial food shops. In 1970 Louis’ wife committed him into a Colorado psychiatric hospital due to his paranoia and cocaine addiction. After surgery to correct an aortic aneurism, Louis was confined to a wheelchair. At the time of his death, Louis was working as an “official greeter” at Caesars Palace. Louis died from a heart attack on April 12, 1981 at age 66. Louis was married four times and had two children.

Mary Esther Wells was born
in Detroit, Michigan. She and her two older brothers were raised by their mother. At 3, Wells was bedridden for two years with spinal meningitis which impaired her vision and hearing. At 10 she contracted tuberculosis. Her ailments almost sent her into a science or medical career, but she caught the performing bug instead. At 17, she tracked down Motown label founder Berry Gordy and belted out an original composition, Bye Bye Baby. Gordy signed her the following day. She recorded the single and hit #45 on the Hot 100. Gordy teamed her up with Smokey Robinson. Together they created The One Who Really Loves You, You Beat Me to the Punch, Two Lovers and her signature song My Guy (1964). My Guy topped the charts for two weeks, and Wells was dubbed the “Queen of Motown.” Unfortunately, Motown had a habit of using the profits from their hit singles to launch the careers of other artists. Wells wanted out.

She did get out of Motown and signed with Fox, hoping for a movie career. The movies didn’t pan out nor did any future hits. In 1965, she signed with the Atco label. Here, Wells had some minor hits, including one with her husband at the time, Cecil Womack (younger brother of singer Bobby Womack), The Doctor. In 1974, Wells somewhat retired to concentrate on her family. She and Womack divorced later that decade and Wells returned to music. In 1981, she had a disco hit with Gigolo. Since she had surrendered the royalties to her earlier (and biggest) hits, Wells was forced now to tour to make a living. She was diagnosed with larynx cancer in 1990. At this point, with her voice gone (it was reduced to a whisper), she was evicted from her home. In the fall of 1991, she testified before a Congressional Committee to push for cancer research funding. On July 26, 1992, Wells died in Los Angeles, California. She was only 49 years old. My Guy was inducted into the Grammy Hall of Fame in 1999.

(You've Got Me) Dangling on a String, 70s, Albums, Chairman of the Board, Detroit, GIve Me Just a Little More Time, R&B, soul 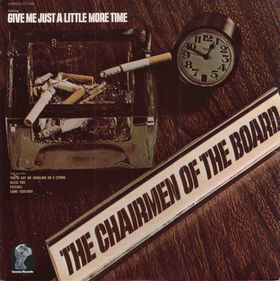 Chairman of the Board was a 1970s Detroit-based soul music group, originally consisting of General Norman Johnson, Eddie Curtis, Danny Woods and Harrison Kennedy. They released their self-titled debut album in 1970. Their debut single, Give Me Just a Little More Time, hit #3 in the U.S. and in the UK. It also hit #8 on the American R&B chart. By May 1970 (after being released in December 1969) the single had sold a million copies and was certified Gold.

Their follow-up single, (You’ve Got Me) Dangling on a String didn’t perform as well, reaching #38 in the U.S., #5 in the UK and #19 on the American R&B chart. Give Me Just a Little More Time was their best known, highest charting Hot 100 and UK Singles chart hit.

Florence Glenda Ballard was a founding member of the Motown female group,
the Supremes. She had 16 top 40
singles, including 10 #1 hits!

Ballard was born in Detroit, Michigan
and was the 8th of 13 children. Her
father encouraged her interest in singing. Ballard met Mary Wilson (another founding member of the Supremes) during a middle school talent show. They remained friends through high school. Their first foray into a “professional” music gig was in the sister group, The Primes. Ballard was the first to win a spot. She brought in Wilson and Wilson brought in her neighbor, Diana Ross. They soon changed their name to the Primettes and won an audition for Motown in 1960. Motown founder Berry Gordy suggested the girls graduate high school then audition again. Ballard ended up dropping out of school, but the others did graduate.

Late in 1960, the Primettes signed with Lu Pine Records, Refusing to give up on their Motown dream, they relentlessly pursued Gordy until he relented and let them record songs in a Motown studio. This was achieved by the end of 1960. In January 1961, Gordy signed them and the Supremes were born — and officially named. Initially, the Supremes struggled to find a hit, which they finally achieved in 1963, with When the Love Light Starts Shining Through His Eyes. In the spring of 1964, the girls had their first #1 hit, Where Did Our Love Go. During their live shows, Wilson recalled that Ballard’s voice was so loud they made her stand 17 feet away from the microphone.

Ballard quickly became dissatisfied with the group’s direction once they began to achieve superstardom. As she struggled to cope with the label demands, Ballard became depressed. She quickly turned to alcohol to cope. The alcohol led to arguments between the girls, then she began to miss shows and recording sessions. In July 1967, Gordy ordered Ballard to return to Detroit; her career with the Supremes was over.

In February 1968, she married Thomas Chapman. In March 1968, she signed to ABC Records and released two unsuccessful solo singles. The album they were intended to be from was shelved. In October 1968 she gave birth to twins Michelle and Nicole. She was officially dropped from ABC in 1970.

In July 1971, she sued Motown for additional royalty payments. She lost. Though that same year she gave birth of another daughter Lisa, she and Chapman separated after several domestic disputes. Ballard’s house was foreclosed. Now, adding poverty to her depression and alcoholism, Ballard retreated from the public eye. In 1974, Wilson asked Ballard to rejoin the Supremes. She did to play the tambourine, refusing to sing again. The press caught wind of her struggles and Ballard entered rehab. Her life seemed to rebound. She reconciled with Chapman and started singing again.

On February 21, 1976, Ballard checked into a Detroit hospital with a numbness in her extremities. She died the next morning from cardiac arrest caused by a coronary thrombosis (a blood clot in a coronary artery). Ballard was only 32 years old. In 1998, Ballard was posthumously inducted into the Rock and Roll Hall of Fame as a member of the Supremes.

1970s, Big City Miss Ruth Ann, Detroit, Gallery, I Believe In Music, Love Every Little Thing About You, Music, Nice to Be With You, One Hit Wonder, soft rock

Nice to Be With You Gallery (Underground Records, 1972)

Gallery was an American soft rock band, best known for their Gold certified 1972 hit, Nice to Be With You. The song peaked at #4 on the Hot 100. They followed that up with a cover of Mac Davis’ I Believe in Music, which peaked at #22. In early 1973 they made their final appearance on the Hot 100 with Big City Miss Ruth Ann, peaking at #23. In 1974 their single Love Every Little Thing About You failed to chart and the Detroit area group disbanded soon after.