I Can’t Love You Any More (Any More Than I Do) was a fox trot with a vocal chorus written by Allie Wrubel and Herb Magidson. It was performed by Terry Shand and His Orchestra. The B-side was Pretty Baby. 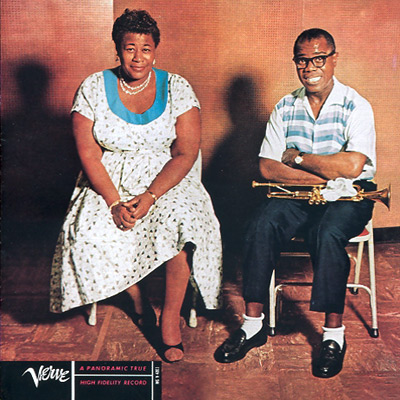 Ella and Louis was a 1956 studio album by Ella Fitzgerald and Louis Armstrong, accompanied by the Oscar Peterson Quartet. The pair had previously recorded for the Decca label in the late 1940s. This was their first (of three) collaboration albums they recorded for Verve Records. They followed up with Ella and Louis Again in 1957 and Porgy and Bess in 1959.

Beverly Lee, Celebrity, Decca, Dedicated to the One I Love, doo wop, Doris Jackson, Florence Greenberg, heart attack, I Met Him on a Sunday, Micki Harris, Shirley Alston Reeves, singer, The Shirelles, Will You Still Love Me Tomorrow

Addie “Micki” Harris was born in Passaic, New Jersey. While attending Passaic High School, she became friends with and formed a music group with Shirley Alston Reeves, Beverly Lee and Doris Jackson. They first called themselves the Poquellos (Spanish for “little birds”). After an a capella performance at a high school talent show, a classmate convinced them to audition for her mother, Florence Greenberg, the head of a small record label. Greenberg was also impressed enough that she signed on as their manager and changed their name to the Shirelles. Their first single, I Met Him on a Sunday was recorded for Decca Records in 1958, cracked the National Top 50 and was a radio hit. Their next two singles flopped leading Decca to pass. They signed onto Greenberg’s new label, Scepter Records and a new producer helped them revamp their style and sound to more pop and doo-wop. In 1960, things finally came together and the Shirelles had their first Gold record, Will You Still Love Me Tomorrow? They soon hit #1 in the U.S. and Britain. They also became the first all-female group of the rock era to hit #1. They re-released Dedicated to the One I Love which broke the Top 5 this time. The Shirelles continued to appear in the Top 5 to Top 10 with additional hits until things derailed around 1963. The U.S. was in full swing under the current British invasion and musical tastes had changed. The Shirelles continued to tour well into the 1980s.

At a performance in Atlanta, Georgia, in June of 1982, Harris suffered a heart attack. She passed away at the age of 42 after paramedics were unable to revive her. In the wake of her death, the band broke up.