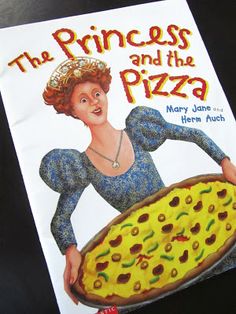 The Princess and the Pizza (Holiday House, 2003)

Warning: This is not your typical “princess” story! Princess Paulina’s father gave up his throne to become a wood-carver and the princess is struggling for a purpose in life. When she hears that Prince Drupert is seeking a wife, she finds herself in a competition to become his bride. Because the other princesses are more of the traditional princess, Princess Paulina realizes how ridiculous the competition is. After a cooking competition, she invents pizza. What’s a girl to do now? Well Paulina opens a successful pizza restaurant and tells Drupert to take a hike.

The Princess and the Pizza was written by American children’s author Mary Jane Auch and illustrated by her husband Herm Auch (as all of her books are).

Best Recipes Ever aired in half-hour installments where the hostess would demonstrate how to make three dishes which fit a specific theme (Best Comfort Food, Best Middle Eastern Takeout, etc.) In the U.S., you can catch Best Recipes Ever on the Live Well Network.

Wok with Yan was a Chinese cooking show that starred Stephen Yan and aired on CBC from 1980 to 1982. Wok with Yan was shot in Vancouver and syndicated internationally to the U.S., the Philippines, Malaysia, Indonesia, Singapore and the Caribbean. In the early 90s, Yan returned for a second edition. In each episode, Yan would wear a different apron with a pun of the word “wok.” Examples included: “Wok & Roll,” “Wok Around the Clock,” “You Are Wok You Eat” and more. Yan frequently smattered spontaneous one-liners during tapings. At the beginning of the episode, Yan was shown in a vignette traveling to vacation spots around the world. An audience member (chosen by a ticket draw) would come up and eat with him at the end of each show.