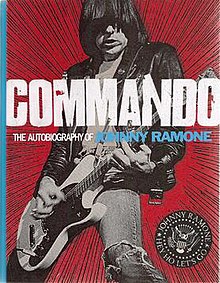 In 1999, Johnny Ramone, guitarist and songwriter of the punk rock band The Ramones was diagnosed with prostate cancer. He began to write his autobiography. In 2004, Ramone died from said cancer. In 2012, his autobiography Commando was published. In it, Ramone shared stories of his childhood, and his life and times with the Ramones. It chronciled his relationship with Linda, including how she had initially dated his brother Joey before leaving Joey for himself. The photos included in the book were picked by Linda. The epilogue was written by close friend Lisa Marie Presley and the foreword being written by only surviving member (at that time) of the Ramones, Tommy Ramone. (Tommy died in 2014 from unsuccessful treatment of bile duct cancer.)