This “infectious” one hit wonder was written by brothers Henry, Jojo and Ringo Garza who are the foundation of the American rock band Los Lonely Boys. Heaven peaked at #16 in the U.S. It topped the American adult contemporary for 16 weeks and was a minor country hit, peaking at #46. Heaven got the Los Lonely Boys nominated for two Grammy Awards, winning Best Pop Performance by a Duo or Group. Heaven appeared on the band multiplatinum self titled debut album.

Felix Cavaliere is an American singer, songwriter, musician and music producer. He was a member of Joey Dee and the Starliters, whose big hit was Peppermint Twist (1962). He was also a member of the Young Rascals. Cavaliere’s best solo effort came in 1980 with Only a Lonely Heart Sees, which hit #36 on the Hot 100 and #2 on the adult contemporary chart.

Cavaliere continues to tour. In 2014 he was inducted into the Hammond Hall of Fame. He lives in Nashville with his second wife. 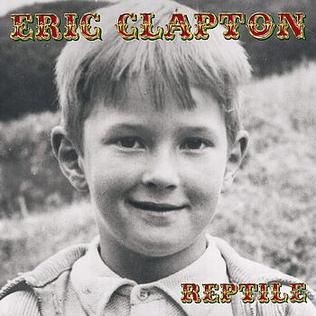 Reptile was Eric Clapton’s 15th studio album. It has sold 2.5 million copies worldwide. Reptile peaked at #1 in Greece and on Billboard’s Top Internet Albums chart. It went
top 5 in Austria, Finland, Germany, Poland, Portugal, Spain, Switzerland and in the U.S. as well as on the European chart. It further went top 10 in Denmark, France, Italy, Japan, Norway, Sweden, the UK and on the Dutch chart. (Yes, Reptile was a huge hit in Europe!) Reptile was certified Gold in Brazil, Canada, Germany, Spain, Switzerland, the UK and the U.S. and went Platinum in Australia.

Three singles were released I Ain’t Gonna Stand for It, a cover of the 1980 Stevie Wonder hit; Superman Inside and Believe in Life. It was written about Clapton’s wife Melia McEnery and used as a promotional single. It peaked at #11 on Billboard’s adult contemporary chart.

You’re a Friend of Mine Clarence Clemons and Jackson Browne (CBS Records, 1985)

This 1985 duet was written by Narada Michael Walden and Jeffrey Cohen. Clarence Clemons was the saxophonist in Bruce Springsteen’s E Street Band. You’re a Friend of Mine appeared on his solo album Hero. Jackson Browne was dating actress Daryl Hannah at the time and she provided background vocals and appears in the song’s video. You’re a Friend of Mine peaked at #18 on the Hot 100, #16 on the Mainstream Rock chart and #21 on the Adult Contemporary chart.

Yes, I’m Ready was originally recorded in 1965 by Philadelphia soul/R&B singer Barbara Mason, who penned the song. Yes, I’m Ready was Mason’s first — and biggest — single of her career. It hit #2 on Billboard’s R&B chart and #5 on the Hot 100.

In 1979 Harry Wayne Casey (lead vocalist and songwriter from KC and the Sunshine Band) was producing Teri DeSario’s second studio album, Moonlight Madness. He and DeSario recorded a duet version of Yes, I’m Ready. It was the lead single from the album and was kept out of the top spot for two weeks in March 1980 by Queen’s Crazy Little Thing Called Love. Yes, I’m Ready went to the top of the Adult Contemporary chart for two weeks and hit #20 on the R&B chart. DeSario’s version of Yes, I’m Ready was certified Gold. Trivia: DeSario also happened to be a high school classmate of Casey’s. Born in the USA by Bruce Springsteen (Columbia, 1984)

Born in the USA was the seventh studio album from American rock singer/songwriter Bruce Springsteen. This critical and commercial darling was the best selling album of 1985 in the U.S. — and Springsteen’s most successful album ever. Born in the USA sold 15 million copies in the U.S., 30 million worldwide, produced a string of Top 10 hits and saw Springsteen tour for 2 years on his Born in the USA Tour.