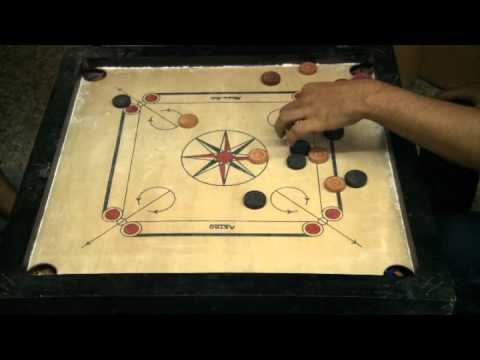 Carrom (also known as Karrom) is a “strike and pocket” table game of Eastern origin similar to billiards and table shuffleboard. It is played throughout the East under different names though most non-eastern people know it by the East Asian name of Carroms (or Karrom). It is very popular in Nepal, India, Pakistan, Bangladesh, Sri Lanka and surrounding areas. In South Asia, many clubs and cafés hold regular tournaments. Carrom is very commonly played within families, including the children, and at other social functions. Different standards and rules exist in different areas.

The objective of play is to use a striker disk with a flick of the finger to make contact with and move lighter object disks called carrom men, which are thus propelled into one of four corner pockets. The striker and carrom men are analogous to the cue ball and object ball in cue sports, respectively. The aim of the game is to pot (pocket) one’s nine carrom men and the queen before one’s opponent does. The carrom queen is analogous to the 8 ball (black ball) in the game of eight-ball pool.