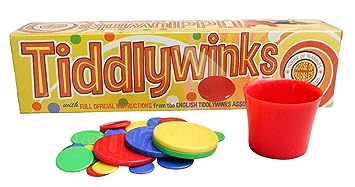 Tiddlywinks is a game played on a felt mat with four different colored sets of small discs (winks), a pot and squidgers (larger discs). The squidger is used to propel a wink into flight so it lands in your pot. The strategy of the game comes from your opponents trying to “squop” you by preventing you from landing in your pot by using their wink to land atop yours. Though at the heart of this game it may have started for kids, the defensive aspect described above has lent an air of appeal for adult competitive leagues.

Tiddlywinks began as an adult parlor game in Victorian England. Joseph Asheton Fincher filed the original patent application for the game in 1888. It quickly became a popular fad during the 1890s. The modern game was established in the 1950s when a group of Cambridge University undergrads formed a Tiddlywinks Society.