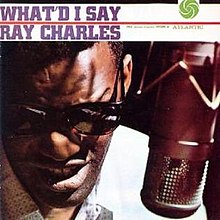 The song itself was accidental. Charles was performing at a concert and they still had 12 minutes left to fill, so they started playing. Audiences (they performed the “song” a few nights in a row) actually dug it and What’d I say became a real song. What’d I Say peaked at #6. At the time of its release, it was Atlantic Records’ best-selling song.